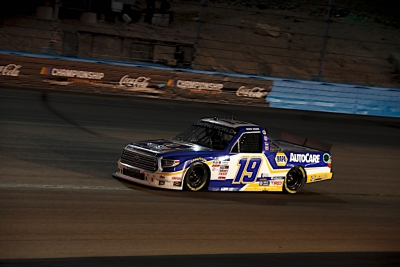 Derek Kraus wrapped up his second full season of competition in the NASCAR Camping World Truck Series with a 15th-place finish in the Lucas Oil 150 at Phoenix Raceway on Friday night.

The 20-year-old driver of the McAnally-Hilgemann Racing No. 19 NAPA AutoCare Toyota Tundra battled handling conditions after getting shuffled back in traffic early in the race.

Kraus had nabbed a solid starting spot by qualifying eighth earlier in the day. He finished Stage 1 in 10th, then slipped back to 14th after the restart. He battled back to finish 12th at the end of Stage 2, but was not able to get back into the top 10 and ended up finishing 15th.

A group of special guests from NAPA Phoenix and a VIP Group from NAPA Power Premium Plus were welcomed by the race team at the track for Friday’s event. VIP NAPA NGK Guest crew members for the event were Vicki and Craig Hill from Hill Auto in Scottsdale, Arizona.

It appeared that you were battling the handling conditions most of the night.

“We started off with good track position. That helped a lot. Then we lost track position and it got tight in traffic. All the MHR guys worked their tails off to get it right. We just missed it. We look forward to coming back next year.”