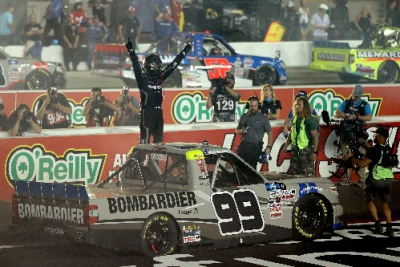 Ben Rhodes wins the 2021 NASCAR Camping World Truck Series title after a battle with Zane Smith in the final laps. Chandler Smith who drives the 18 Safelite Toyota Tundra won the race despite not being in the playoffs. Zane Smith finished 2nd in the playoffs and was moved out of the way by Rhodes coming out of turn 4 with just a handful of laps to go. John Hunter Nemecheck and his number 4 Pye-Barker Fire & Safety  Toyota got damaged on the first lap causing him to be down several laps. But on Lap 102, the caution came out and Nemecheck was able to get back on the lead lap and wound up finishing 7th in the race and finsihed 3rd in the standings. Matt Crafton didn’t have the night he needed. Not necessarily a contender for the lead the whole race although he finished his number 88 Ideal Doors / Menards Toyota in the 12th place finish and 4th out of 4 in the final standings. The race had 4 cautions for 25 laps. It had 12 lead changes with 3 different leaders. The race lasted 1 hour, 30 minutes, and 34 second and had an average speed of 136.576 mph.

Here are the championship 4 final standings for 2021