Kraus Caught Up In ‘Big One’ At Talladega 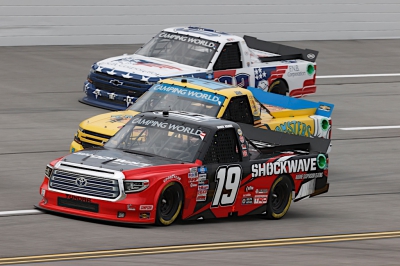 Talladega Superspeedway is known for big wrecks, commonly referred to as “the big one.” Derek Kraus got caught up in one of those big ones that involved half of the 40 entries in Saturday’s NASCAR Camping World Truck Series race.

Despite damage to the McAnally-Hilgemann Racing No. 19 Shockwave Toyota Tundra, he managed to continue on and salvage a 20th-place finish.

Kraus, who had started 13th on the grid, was mired in traffic through much of the first half of the race as the field held steady – running side-by-side in two tight lanes of traffic. After finishing 20th in Stage 1 and Stage 2, he restarted 14th on Lap 47. Calamity struck 10 laps later when a couple of the leaders got turned sideways and the resulting pileup collected 21 trucks.

Kraus shot to the left and appeared he would clear the incident, but a spinning truck tagged his and sent it sliding out of control – where it was hit, again. After getting his Tundra to the pits and to the service by his MHR crew, he was able to continue in the race – although off the pace and down multiple laps.

Kraus is 13th in the championship standings, 19 points out of 12th; with two races remaining this season.

How close did you come to getting through the wreck?

“Ehh. I don’t really know how close I was to making it out of that. I haven’t seen the replay yet.”

What was it like driving the truck with damage after that?

“The Tundra was damaged and we really didn’t know what it was going to do.”