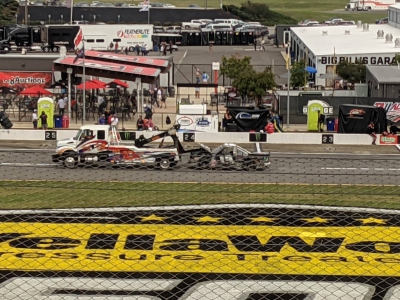 It was a relatively quiet stage one from Talladega as 40 racing machines took to the 2.66-mile monster aside from a scary moment with Nemechek who took to the high side midway through the stage as he came down over the nose of Johnny Sauter.

Nemechek while working both lines and help from Sheldon Creed was able to challenge Ben Rhodes who led 18 laps followed by Nemechek and Gilliland with a lap each. Rhodes for his effort would take home the stage win over Austin Hill who mounted a late-stage charge on the leader.

A quick caution flag few just after getting back underway following an incident with Dauzat losing the truck down the back and getting into the wall ending his day.

Business started picking up with just a handful of laps left in stage two as Nemechek moved Crafton out of the way to take over the lead. Crafton would be forced to bail out below the line and lose a whole bunch of positions as he got back up in line yet was able to get back in with the pack to finish out the stage in fourth.

But the pushing and shoving wasn’t done there when Sheldon Creed the eventual stage winner would move Nemechek out of the way to get in position to run down Johnny Sauter for the lead on the last lap of the stage. Nemechek would end up finishing the stage in eighth.

It was bound to happen, and it continued to build as drivers jockeyed for position till it was Austin Hill getting turned up into Zane Smith right behind the leader to start the chain reaction collecting about a dozen racing machines that involved Johnny Sauter, Austin Wayne Self, Drew Dollar and more. Zane Smith day would end in this incident to also throw a wrench into his playoff chances.

As laps continued to wind down the pace of intensity continued to pick up as Creed got into the backend of Enfinger just off turn four sending him spinning down the track in front of the back half of the main pack. Enfinger in the ensuing melee was hammed by Greenfield sending that truck up in the air for a moment. Also involved in that was Carson Hocevar a playoff contender and Hailie Deegan ending both of their days.

With the white flag in the hand of the starter and in the sights of the leader Chase Purdy just after taking the lead would spin through the trioval to bring the race under the sixth caution of the day but also setting up a NASCAR overtime run.

Gilliland and Rhodes setup side by side on the front for a run to the end as the green flag flew. Rhodes with help from Holmes got out to the lead for a moment but just as soon as it happened Gilliland mounted a charge back to the lead to get hit from behind and got tied up in turns three and four as NASCAR allowed the race to race to a conclusion.

From the trioval the start finish line Nemechek took the lead and lost it after getting clipped by Fogleman who would cross the line spinning with Tyler Hill to win the Chevrolet Silverado 250.

“That’s just how every race here for the past however many years has ended some way like that. It is what it is. I can’t be mad. As much as you want to be mad, you can’t be mad. It’s partly my fault. You take it with a grain of salt. I’m more mad at myself than anything for not staying higher to kind of stay away from him. It is what it is.” Said Nemechek

This would be Fogleman first career truck series victory yet before Fogleman could take in the spoils of victory would need to take the mandatory trip to the care center.

The truck series now moves onto their final cutoff race at the half mile bullring Martinsville Speedway on October 30th for the United Rentals 200 at 1 p.m. ET on FS1.