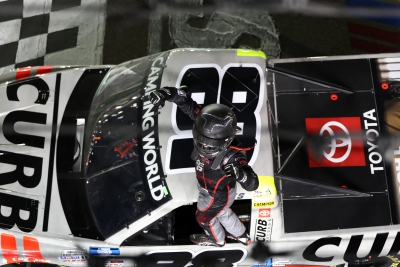 Christian Eckes earned the first victory of his career on Friday night at Las Vegas Motor Speedway, as ThorSport Racing laid claim to the top four finishing positions for the first time in Truck series history.

The part-time driver of the No. 98 Curb Records Toyota captured the checkered flag for the first time in 44 tries, a season after being replaced at Kyle Busch Motorsports.

Winning the race after a caution came out on the final lap, Eckes was at a loss for words.

"This is big, it's been a tough year since last November. Hopefully I proved I can still do this. ... I'm speechless." Eckes said on the FS1 telecast.

Rhodes now leads the points with two races remaining in the Round of 8.

"I'm just happy with the night, we come in from Bristol barely getting in (to the Round of 8), and now I hear that we're the points leader. ... I thought I could challenge him (Eckes), I needed one more corner before that yellow came out and maybe I [could have challenged] him for the win."

Creed now finds himself in a precarious position following a dominant opening round of the Playoffs, as he was involved in a fiery crash about halfway through the race. Creed's GMS Racing teammate Tyler Ankrum got loose coming off of turn two and collected another Playoff driver -- Chandler Smith -- sending him down the racetrack in front of Creed. Creed was unable to avoid Smith and slammed into his rear, setting his truck ablaze and Smith into the air; both drivers were OK.

Rounding out the top-five was Todd Gilliland, who won Stage Two and led a race-high 66 laps, but was shuffled back on the final restart by the ThorSport foursome.

Championship-favorite John Hunter Nemechek won Stage One and looked to have the truck to beat, but was hampered by an ill-performing engine for much of the night. Though he maintains a 28-point advantage on the cutline, he finished 33rd.

Playoff-driver Zane Smith also experienced issues on the evening as he cut a tire and tore the left-rear of his truck, necessitating a battery replacement; he finished multiple laps down in 29th.

Another playoff-driver -- Niece Motorsports' Carson Hocevar -- was on his way to a top-10 finish before developing a loose-wheel and spinning out just before reaching pit road. NASCAR ruled that it was intentional and held him on pit road for a lap, resulting in a 22nd-place finish.