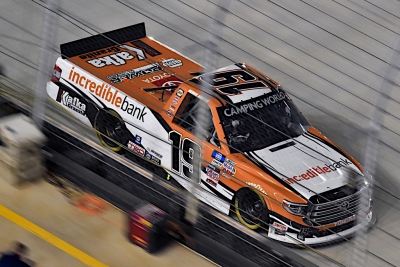 Despite battling handling issues, Derek Kraus was able to come away with a 13th-place finish at Bristol Motor Speedway on Thursday night in the UNOH 200 presented by Ohio Logistics.

The McAnally-Hilgemann Racing team worked on the No. 19 IncredibleBank/ Kafka Granite Toyota Tundra throughout the race as Kraus battled the competition around the high-banked, half-mile track.

He had initially gained a few positions, after starting the race in 15th. He faded back, however, as handling issues set in. It was a back-and-forth race, as he gained spots and then lost them while stopping for adjustments. Kraus managed to avoid the carnage encountered by others that resulted in 11 cautions. He then mounted a charge after the final restart to gain about seven positions in the final five laps of the race.

The team aims to get back on track quickly as the circuit heads to Las Vegas Motor Speedway next week for an event on Friday, Sept. 24, and then travels to Talladega Superspeedway the following week for a race on Oct. 2.

What was the handling issue you battled?

“We battled a tight condition throughout the race. It made for a long night, but our MHR team didn’t give up and continued to work try to make it better.”