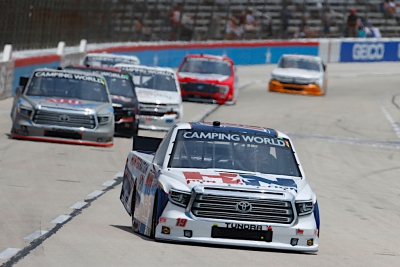 A good points day for Derek Kraus in the NASCAR Camping World Truck Series at Texas Motor Speedway on Saturday, boosted him two spots into the top 15 in the championship standings.

The driver of the McAnally-Hilgemann Racing No. 19 Hunter Nation Toyota Tundra scored important stage points – with a top-three in the second segment of the race and a top-10 in the first segment – to go with a 13th-place finish overall in the SpeedyCash.com 220.

After starting ninth on the grid, Kraus finished Stage 1 in eighth place. He capitalized on varying pit strategy by his competition in the second segment, to finish third. He battled handling issues in the final segment of the race, which went caution-free, to come away in 13th.

In advance of the race, Kraus participated in a special appearance with Hunter Nation at the Texas Gun Experience in Grapevine. He met with fans and signed autographs, with the No. 19 Hunter Nation Toyota Tundra and MHR hauler on display.

Kraus also had the honor of meeting decorated military veteran John Wayne Walding, who was a VIP guest on the MHR pit box at the track on Saturday. An Army veteran of nearly 12 years who served seven years in Special Forces, Walding received the Silver Star, Bronze Star and Purple Heart. He was the first amputee to become a Green Beret sniper.

In addition to Hunter Nation serving as the primary sponsor, NAPA AUTO PARTS had strong associate branding on the MHR Tundra at Texas.

As activities in the NASCAR garage took another step this week in returning to normal, MHR welcomed more guests for the VIP garage experience. Featured among them was a special group of NAPA guests.

Tell us about your day in Texas.

“Our Hunter Nation Tundra was just really tight. We lost track positions during one of the pit stops and just could never fight back to the front.”