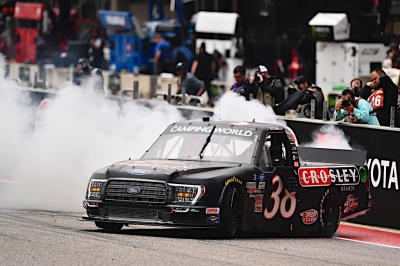 Gilliland pulled away from the field in the final laps of the race and would go on to win by 7.9 seconds.

Gilliland won the first stage, beating Kaz Grala on the final lap of the first stage of the race. Gilliland would have to restart at the end of the field at the second stage after he was penalized for having too many pit crew members over the wall too soon.

Saturday’s race started in the rain and ended under sunny conditions.

Rounding out the top five were Kaz Grala in second, Tyler Ankrum in third, Grant Enfinger in fourth and Sheldon Creed in fifth.

Rounding out the top ten were Sam Mayer in sixth, Carson Hocevar in seventh, Zane Smith in eighth, Austin Hill in ninth and Ben Rhodes in tenth.

The NASCAR Camping World Truck Series will head into Charlotte Motor Speedway next Friday at 8:30 p.m. Eastern on FS1.