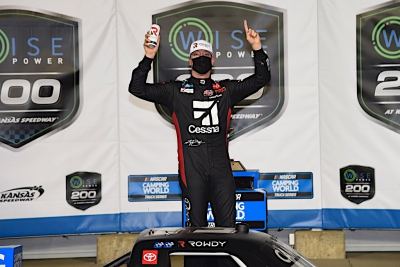 Busch went from fourth place to the lead on the final overtime restart to win the race.

“All the restarts were hectic for us,” Busch said post-race. “Anytime we started on the front row, we would always go backwards. It would just not fire on the restarts for whatever reason. We definitely had a really good strong long run truck. Those restarts were just nor for us. We made it work on that last one.”

Driver No. 51 lost the race lead to Ross Chastain on the first overtime restart but a caution would come out and their would be a second attempt at overtime. Busch started on the outside lane of row 2 and went to the top lane to pass Chastain and Austin Hill for the race lead. Busch would take the lead off Turn 4 with two laps to go and go onto win his second race of the 2021 season and his 61st in the series.

Rounding out the top five were Ross Chastain in second, Austin Hill in third, Christian Eckes in fourth and John Hunter Nemecheck in fifth.

Rounding out the top ten were Todd Gilliland in sixth, Zane Smith in seventh, Raphael Lessard in eighth, Johnny Sauter in ninth and Ben Rhodes in tenth.

The NASCAR Camping World Truck Series will race at Darlington Raceway on Friday at 7:30 p.m. ET on FS1.