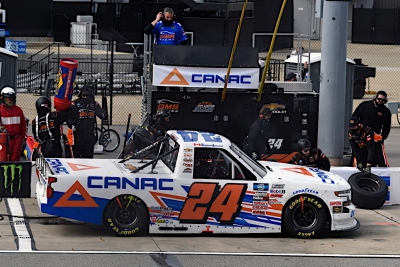 Raphael Lessard is comfortable on relatively short oval tracks like Richmond Raceway. From fifth on the grid, everything was in place for a result at the front of the field, driving the #24 Canac Silverado prepared by GMS Racing.

Raphael Lessard fought successfully in the top-5 over the first 50 laps of the race and in the top-10 during the first 180 laps, collecting precious bonus points in the first two segments by finishing both of them in 7th place. Following the caution period on lap 187, several incidents occurred: an error in the pits dropped Raphael Lessard to the middle of the field, and a driver he was trying to pass caused an incident that forced him to enter the pits in order to straighten the left side fenders. In the end, Raphael Lessard crossed the finish line in 23rd place.

The Race As Seen by the Driver (extracts)

"I was confident in my Canac truck at the start of the race. We believed that a top-5 or better finish was well within reach, especially with the great set-up the team was improving on during the stops. The truck was even running better and better in the longer segments.

We stopped late in the race to fit new tires in anticipation of overtaking rivals who had stopped early. Everything was going well until a team mistake in the pits cost me positions. We started from 21st position and then a competitor damaged the left side of my truck. It was a frustrating end to the race," said the unhappy driver of the #24 Canac Silverado.