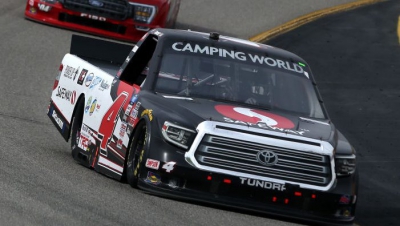 After a two-week break for the NASCAR Camping World Truck Series, the series went back in action for some short track racing at Richmond Raceway. Following the 250 laps around the 0.75-mile track, it was John Hunter Nemechek that hoisted the trophy. Leading 114 laps throughout the race, Nemechek managed to grab his first career win at Richmond and his second win of the 2021 season. Importantly, the victory also marks the fourth win in a row for KBM and the sixth straight win for Toyota.

“We have had a never give up attitude. It’s pretty cool to come out here and do what we did,” said Nemechek, who is now the second two-time winner in 2021.

En route to his victory, there were nine lead changes and eleven cautions. Ben Rhodes led the field from the pole position to begin the race. However, the first lead change of the race appeared quickly. On lap 3, Grant Enfinger passed Rhodes to take the number one spot. Though Ryan Truex suffered from a right rear tire rub, there were no incident-related cautions in stage one. At the end of 70 laps, Enfinger grabbed the green checkered flag, marking his first stage win of the season.

Following the stage break, Kyle Busch was the quickest off pit road, which allowed him to take the lead to begin stage two. While on pit road, Stewart Friesen, Tyler Ankrum, and Spencer Boyd were all handed penalties. Once back under green, Busch led until the second caution of the day came on lap 15 of stage two. Contact between Hailie Deegan and Tate Fogleman was the source of the yellow flag. Under the yellow flag, a mechanical issue forced Ryan Truex to step out of the truck.

Under green, John Hunter Nemechek quickly moved past his boss Kyle Busch. However, a caution brought the race to a halt as Nemechek took the lead on lap 100. A spin from Jennifer Jo Cobb was the cause of the caution. Following this accident, Nemechek picked up right where he left off and remained in first for the remainder of stage two. Nemechek’s stage victory is his sixth of the season, the most of all drivers.

While on pit road, Austin Hill was the only driver to receive a penalty, and Nemechek was able to maintain his lead going into the final stage. Shortly after the start of the final stage, Derek Kraus spun to bring out the fifth caution of the day on lap 152. Another caution soon appeared for Chase Purdy’s spin as they went back under green. Cobb’s crash into the inside wall on lap 84 brought out yet another yellow flag.

Nemechek maintained his lead on each restart. A mechanical issue ended Brett Moffit’s day shortly after the restart, but there was no caution for this issue. However, Jennifer Jo Cobb spun Norm Benning in retaliation for an event earlier in the day. This wreck was the cause of the caution on lap 177, and Cobb was called to meet with NASCAR officials postrace. After half a lap under green, Dawson Cram brought out the yellow flag again.

Nemechek continued to be the leader. With a shove from Austin Wayne Self, Codie Rohrbaugh became the cause of the tenth caution on lap 196. Eight drivers decided to stay out, while the majority of the field pitted. On pit road, Sheldon Creed faced a penalty. Meanwhile, the no-pit strategy allowed Matt Crafton to lead the field on the restart. On the restart, Chandler Smith managed to pass both Crafton and Johnny Sauter to steal the lead. However, his lead was brought to halt as the yellow flag waved with 37 laps to go. Kris Wright suffered major damage. Cram, Gray, Friesen, Lessard, and Deegan were all involved but sustained minor damage.

Under green, Chandler Smith maintained his lead until Nemechek passed him with 17 laps to go.

As Nemechek crossed the finish line in first place on lap 250, Kyle Busch trailed closely to snag a 1-2 finish for Kyle Busch Motorsports. Tyler Ankrum, Chandler Smith, and Johnny Sauter rounded up the remainder of the top-five.

The Truck Series will be back in action on Saturday, May 1 at 7:30 PM ET. To watch the Truck Series take on Kansas Speedway, be sure to tune into FS1.