Day Ends Early For Kraus On Dirt At Bristol 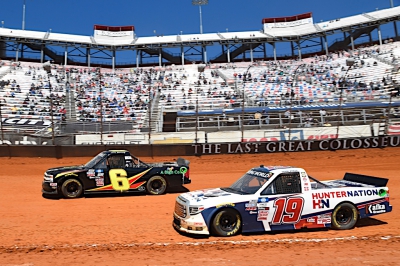 The day ended early for Derek Kraus as the NASCAR Camping World Truck Series raced on the dirt at Bristol Motor Speedway on Monday.

The McAnally-Hilgemann Racing No. 19 Hunter Nation Toyota Tundra driven by Kraus was sidelined after suffering major damage in an accident on Lap 49.

Kraus was battling his way forward, after starting at the tail of the field – due to a problem when the trucks rolled off the grid to begin the race. He had worked his way up to 28th prior to the accident. Damage was beyond repair, leaving Kraus to finish 38th.

The Bristol race was postponed twice due to heavy rain that saturated the area over the weekend. It is one of two dirt track events on the Camping World Truck Series schedule this year. The circuit is scheduled to compete at Iowa’s Knoxville Raceway on July 9.

Rate this item
(0 votes)
Tweet
« Early-Race Accident Relegates John Hunter Nemechek To 39th At Bristol Spectacular Drive Through the Pack by Raphael Lessard On the Bristol Dirt: From 29th at the Start to a 3rd place finish »