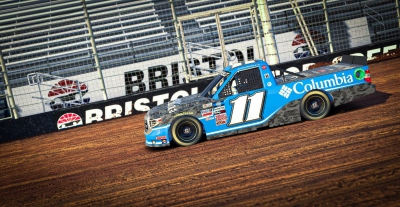 Announced last week, Bubba Wallace in a collaborative effort with Hattori Racing Enterprises will pilot the No. 11 Columbia Sportswear Toyota Tundra for the 150-lap event.

Wallace lays claim to six victories in the Camping World Truck Series, including the 2014 dirt race at Eldora Speedway.

The Mobile, Ala. native is gunning for his first series win since 2017 and is focused to gain precious experience for the NASCAR Cup Series’ dirt event on March 28th.

SDM and driver Spencer Davis will utilize the fifth Truck Series race of the season to also gather notes for the upcoming dirt race at Knoxville Raceway in July.

“Even though I am not driving, this is an exciting weekend for Spencer Davis Motorsports,” said Spencer Davis. “We know that Bubba is going to go out there and wheel that No. 11 Columbia Sportswear Toyota Tundra to a good finish.

“I know that his prior Truck Series experience on dirt should prove to beneficial for him and his feedback will only help us accelerate as a company moving forward.”

Wallace, the full-time driver for 23XI Racing in the NASCAR Cup Series is set to compete in his first Truck Series race in nearly seven years since competing in the season finale at Homestead-Miami (Fla.) Speedway in 2014 for Kyle Busch Motorsports.

“I’m pumped to get to Bristol and run on the dirt in the No. 11 Tundra,” said Wallace. “This is a race I’ve had circled on my calendar for the Cup race, so to be able to add the Truck race and have Columbia come on board just adds to the excitement for that week.

“I have the one win in the Truck Series at Eldora, and it was a lot of fun. I may need to pull some notes from that race to prepare, but I’m just really looking forward to getting back in a Tundra and starting the Bristol weekend with a win.”

Following Atlanta, Spencer Davis Motorsports locks 35th in the championship standings, up one position from the previous race at Las Vegas (Nev.) Motor Speedway on Mar. 5, 2021.

“I am really proud of our efforts at Atlanta,” sounded Davis. “We wanted to come out of the box with a strong result that we could build on and we did exactly that. It is important for us to keep up that momentum and hopefully, the results will come too.”