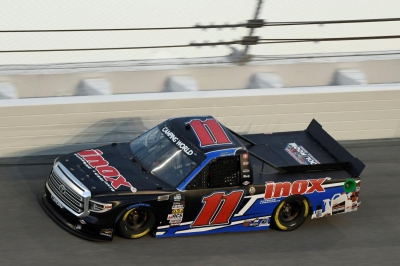 Davis attempted to make the 2021 NCWTS season-opener at Daytona (Fla.) International Speedway but fell short of making the event by mere thousands of a second.

With a guaranteed starting spot for his first Truck Series race of the season, Davis is feeling rejuvenized and ready to conquer his home track race aboard his No. 11 family-owned Toyota Tundra.

“I’m incredibly thankful to get back to the track this weekend and run at Atlanta,” said Davis. “I understand the format of getting into the Truck Series fields this season but sitting at home every week was painful instead of being at the race track with our Toyota Tundra.

“I’m thankful everything worked out and we go to Atlanta this weekend and get our season started and have some fun.”

INOX Supreme Lubricants will be featured on Davis’s No. 11 Toyota Tundra for the full 2021 NASCAR Camping World Truck Series season. INOX product range was first released in 1989 with the Original INOX MX3 Lubricant. The original MX3 product was in development stages for two years prior to release with testing and focus on creating the right product for the market.

The INOX product range continues to grow with 12 products on the market, each with their own many specialized qualities used in all different industries. All their products are tested and trialed before hitting the market to ensure the best of quality is maintained in the INOX name. INOX products are available at all major industrial, electrical, automotive, hardware, bearing and mining, marine, fishing and tackle outlets, plus many more locations.

“Excited to have a long-time friendship turn into more for Atlanta with INOX Supreme Lubricants,” said Davis. “It feels great going there with a popular new scheme and an awesome sponsor, can’t thank Angel and James at INOX enough for their continued support and partnership with our small team.

“Looking forward to having them more on this year hopefully, thrilled to be a brand ambassador and represent them to the best of our ability. We use their products day to day on our race team and in our machines at our business. A quality product and amazing people helped bring this all together.”

Davis, a native of Dawsonville, Ga. is poised to make his third NCWTS start at Atlanta. He made his track debut at the Hampton, Ga. race track in 2018 finishing a respectable 13th after qualifying fourth. Additionally, he finished 25th last June after starting 34th in his SDM entry.

“We are definitely going to Atlanta shooting the bar for a top-20 finish or better,” added Davis. “That would be a great boost to our season and get us some traction for the races ahead. We have some work to do, but we are prepared to put the time and effort in to do everything we can to put SDM near the front.

“Atlanta is my hometown track, and it is important to me to come out of there with the strongest finish possible. Unfortunately, because of the COVID-19 protocols, we won’t have a lot of support in the garage or on pit road – but I know the stands will be packed with supporters and that means a lot.”

In other team news, Spencer Davis Motorsports announced on Thursday that Darrell Wallace Jr. will pilot the No. 11 Columbia Sportswear Toyota Tundra in next Saturday’s Pinty’s Dirt Truck Race at Bristol (Tenn.) Motor Speedway. It will be Wallace’s first time behind a Toyota Tundra since 2014 at Kyle Busch Motorsports.