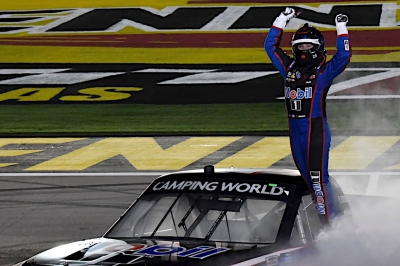 It was a 1-2 finish for Kyle Busch Motorsports. Nemechek, 23, of Mooresville, N.C., led a race best 94 laps in the No. 4 Toyota – the pair combined to lead a dominating 110 of the 134 total laps with each taking a Stage victory.

And while Nemechek held the point for most of the race, it was a typically thrilling Las Vegas show turned in by the Vegas native Busch, who has won the last three spring races at the track.

Busch started 29th and raced his way inside the top 10 by the 10th lap. A blown tire on his No. 51 Kyle Busch Motorsports Toyota put him down a lap with about 50 laps remaining and again, he turned in a dazzling performance – restarting 25th with 31 laps to go and breaking into the top 10 just 10 laps later.

The two Kyle Busch Motorsports drivers were lined up first and second on the race’s final restart with six laps to go, but Nemechek was able to pull ahead and pull away to his first series victory driving for the series all-time winningest driver Busch.

“Coming back to the Truck Series, that was the plan, that was the goal, we came into the year with the hashtag ‘here for wins’ and we are here for wins," said Nemechek who has seven career series wins. “I definitely think experience paid off tonight."

Disappointed not to win, Busch was still encouraged for his team after the race.

“It’s perfect, it’s all you can ask for, it’s everything," the two-time NASCAR Cup Series champion Busch said of his team after the race. “It’s cool to see the four-truck in Victory Lane and see John Hunter have a shot and get back in Victory Lane.

“Having Eric Phillips back and all the guys that have come on board this year doing all the stuff that we’re accustomed to doing and getting back to running up front, seeing both of us sharing in that and having that speed, that four-truck was fast.

“Even on those short runs I couldn’t run with him. After about eight or 10 (laps) I had a better shot at running with him but we just didn’t have the laps there at the end."

Enfinger and Kligerman both collected an extra $25,000 bonus check from series sponsor Camping World for their top-10 efforts. The series sponsor offered an incentive program this week with an extra payday available for the 10 trucks that carried the Camping World name on it, as Enfinger and Kligerman’s did. There was a bonus for winning, finishing among the top-five and finishing among the top-10.

With the win, Nemechek takes a 14-point advantage atop the championship standings over the season’s two-time winner Rhodes. The series next race is the Fr8Auctions 200 on March 20 at Atlanta Motor Speedway.