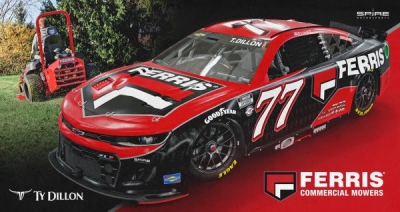 Ferris Mowers, a leading commercial and industrial turf care equipment provider, will sponsor Ty Dillon in a select number of NASCAR Cup Series (NCS) races in 2023. Dillon, who embarks on his inaugural season with Spire Motorsports, will debut the No. 77 Ferris Mowers Chevrolet Camaro ZL1 in the 65th running of the Daytona 500 at Daytona International Speedway. The announcement was made today in Concord, N.C., at Charlotte Motor Speedway.

Dillon will also feature Ferris branding in a select number of starts behind the wheel of the No. 3 Richard Childress Racing Chevrolet Camaro SS in the NASCAR Xfinity Series.

“Ty is a great ambassador for the Ferris brand, and we enjoy a great relationship with him,” said Christin Wam, senior director of marketing, Briggs & Stratton. “We’re excited to see what he can do this season with both Spire Motorsports and Richard Childress Racing.”

“I’m excited to be partnering with Ferris once again,” said Dillon, who is entering his sixth full-time season in NASCAR’s premier series. “Ferris has supported my career since 2013 when I drove dirt late models and I’m grateful for a continuing relationship. To carry and represent their brand 10 years later is an honor and I know we will accomplish great success on and off the track in 2023.”

The links between Ferris and racing run deep. The company’s patented suspension system is inspired by stock-car racing. That suspension system is unlike any other in the outdoor power equipment industry and is prized by lawn contractors for its comfort, traction and mowing efficiency.

The 65th running of the Daytona 500 will be televised live on FOX, Sunday, February 19 beginning at 2:30 p.m. Eastern Standard Time (EST). The first of 36 races on the 2023 NCS schedule will be broadcast live on the Motor Racing Network and SiriusXM NASCAR Radio.