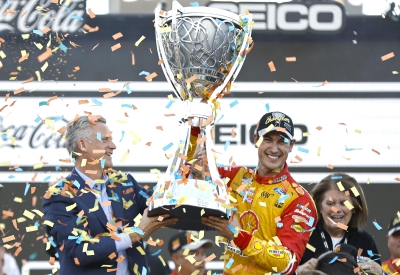 “We did it,” quoted Logano talking to NBC Sports after taking the checkered flag.”We’re champions again, yes! Oh, my God, I’m so excited. Thank you to everybody, my team. You guys are amazing. Gave me a good race car, good pit stop there at the end, got us up in front. Boy, that was just intense there at the end. It’s all about championships. That’s what it’s all about, and we worked so hard the last couple weeks trying to put ourselves in position. And everything that happened in 2020, I knew we just wanted to have a solid run and do this today. I can’t thank Ford and Shell-Pennzoil enough for supporting me over the last 10 years, getting us a couple championships today. All our partners at Team Penske, everybody that works on these cars. It’s such a big deal to win these championships. It impacts so many people’s lives.”

Logano would end up leading 187 of 312 laps around the one mile track in the Arizona desert. The 500k race would end up having six cautions for 39 laps, and would have 11 lead changes throughout the duration of the race (2 hours, 58 minutes, and 42 seconds). Logano won the race by beating teammate Ryan Blaney by 0.301 seconds.

Paul Wolfe, who served as crew chief for Logano in his third season for the No. 22 team, told the media his initial mind set after securing the 2022 title. “Probably a bit of relief, to be honest. Gosh, it’s so hard to win these things. I told a few people this before the weekend, we knew we were prepared the best we could be. We had the speed when we unloaded, and it was just — you get into this race and you just don’t want to screw it up. There’s so much work by a lot of people back at the shop and the guys on this team and our teammates. So much goes into it, and you just don’t want to make a mistake during that race.”

Team owner Roger Penske, who for the first time won an IndyCar Championship as well as a NASCAR Championship in the same year, shared his emotions. “What a special weekend for us. I guess what I want to do is say a prayer for Joe Gibbs and his family for the loss he had. That certainly is more important than a win or a championship. I just want him to know we feel that as a team, I do personally, and our family. Joey (Logano) did a great job. You’ve seen what he’s been able to do as he’s come on the team, and for us to have two championships in the same year, that’s what we’re here for. That’s the goal we have every year. I think we’ve been close, but we got it this year.”

NASCAR will be holding its annual season ending banquet in Nashville, Tenn., on Nov. 30th and Dec. 1st, where the champion of all three national touring champions will be recognized in front of the NASCAR community.