Buescher Rebounds for 13th in Homestead 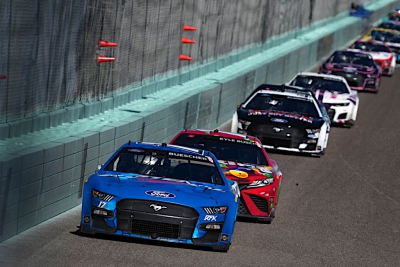 Buescher began the day inside the top-10 as he and teammate Brad Keselowski both advanced to the final round of Saturday’s single-car qualifying. With the eighth-quickest lap on Saturday, Buescher earned his 10th top-10 starting spot of the season.

In total just five cautions were displayed throughout the afternoon with the first coming at lap 30 for a spin. Buescher was 19th at the time of the yellow and went on to finish the opening stage in 21st.

A green-flag pit cycle separated the second stage with Buescher bringing the Fastenal machine to pit lane at lap 121. He maintained a top-20 position but was lapped by the leaders in the closing laps of the segment. However, he was the recipient of the free pass when the yellow was shown with five to go in the second stage in what was the stage end.

After a reset to the afternoon to get back on the lead lap, Buescher began the third stage in 19th. Then, as another green-flag pit cycle began to play out with just over 50 to go, Buescher was one of a handful of cars yet to hit pit road, and was scored 10th as the caution was displayed for the fourth time.

He restarted 10th with 51 to go, and maintained in 13th with 23 to go when the final yellow flew, before ultimately crossing the stripe 13th.

Martinsville Speedway hosts the second to last race of the 2022 season next weekend. Race coverage Sunday is set for 2 p.m. ET on NBC, with radio coverage on MRN and SiriusXM NASCAR Radio.