Burton Finishes 28th at the ROVAL 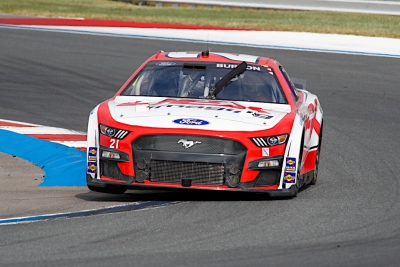 Harrison Burton and the No. 21 DEX Imaging team emerged from a chaotic race at the ROVAL at Charlotte Motor Speedway with a 28th-place finish.

Burton, racing on his 22nd birthday, started the Bank of America ROVAL 400 from 23rd place and drove into the top 20 before making his first pit stop with three laps remaining in the first 25-lap Stage.

He wound up 23rd in that segment but moved into the top 15 after other drivers made pit stops during the Stage break.

As the laps wound down in the second Stage, and numerous drivers made pit stops, he took second place and ended the Stage there, earning nine bonus points.

Burton made his second pit stop at the end of the second Stage and since he was one of the last drivers to pit, he rejoined the field near the back of the pack.

From that point on, he battled hard for every spot and was involved in several multi-car bump ups. Even with a spin in the frenetic final laps, he took the checkered flag in 28th place, one lap off the pace.

Still, he earned 18 points for the day and moved up one spot in the points standings to 27th.

Burton and the No. 21 team now turn their attention to Las Vegas Motor Speedway and next week’s South Point 400.

Rate this item
(0 votes)
Tweet
« Buescher Charges Through Late Race Chaos, Finishes Sixth NCS: Christopher Bell punches his ticket into the Round of 8 with a win at Charlotte Roval »