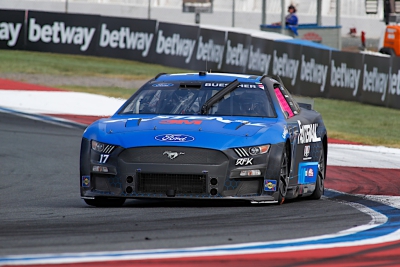 Track position would prove to be tough in this year’s NASCAR Cup Series race on Charlotte Motor Speedway’s ROVAL configuration, but a few late race cautions would help provide an opportunity for the Fastenal Ford Mustang to shine.

Starting from the rear of the field after an unapproved adjustment, Chris Buescher made quick work of almost a dozen cars to crack the top-30 by lap five. Reporting that the car needed more lateral grip after the first run, crew chief Scott Graves exercised the option to short-pit before the stage end, putting Chris in 24th to end the first stage.

Cycling through to 15th for the start of stage two, Chris hovered around the top-15 until the No. 17 team short-pitted again with eight laps to go in the stage. This would once again put Chris 24th to end the stage, lining him up 14th for stage three once all cars cycled through pit stops.

In a mostly uneventful stage three, the No. 17 Fastenal Ford Mustang made it up to the 12th position with ten laps remaining, followed by a caution for debris with under ten laps to go. Electing to take four tires and fuel under caution, Buescher would line up outside the top-10 for a three lap dash to the finish.

The caution would fly for incident twice in the final run to the finish, even seeing a red flag for cleanup on the backstretch chicane. Buescher would pull through the madness to come home with a sixth-place finish, his fifth top-10 of the season on a road course.

Las Vegas Motor Speedway is the next stop for the NASCAR Cup Series. Race coverage next Sunday is set for 2:30 p.m. ET on NBC, with radio coverage on PRN and SiriusXM NASCAR Radio.