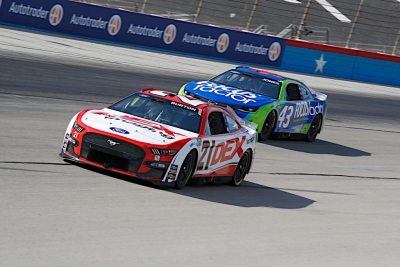 Harrison Burton and the No. 21 DEX Imaging team carried the late Nancy Wood’s name above the door of their Mustang in Sunday’s Autotrader EchoPark Automotive 500 at Texas Motor Speedway as part of a Cancer Heroes program. And he and the team turned in a performance that would have made her proud.

In a race that saw team after team fall victim to tire issues and other problems, Burton and the DEX Imaging team fought through serious issues of their own and wound up leading laps and running among the leaders on multiple occasions before winding up 18th at the finish.

Burton started 20th and ended the first 105-Lap Stage in 12th place but with the fuel and fresh tires he needed to stay on the track during the ensuing caution period and move into the top five for the restart.

Burton charged forward, took the lead on Lap 123 and led the next 15 circuits, the most laps he’s led in a race in his brief Cup Series career.

He led the field to pit road when the caution flag flew for a spin by Christopher Bell, but the pit stop went awry with trouble on the change of rear tires compounded by a gasoline fire.

After some scary moments – and some alert reactions from the DEX Imaging crew - the fire was extinguished Burton was able to rejoin the race just one lap down.

Burton was in the free pass position on Lap 185 when Chase Elliott wrecked and saw his car also catch on fire. Back on the lead lap, the DEX Imaging team basically employed their strategy from the first Stage, ending the second Stage in 15th place but poised to jump back to the front of the pack for the start of the third and final segment of the race.

After a red-flag delay for rain and lightning, he ran in the top five and top 10 until the closing laps when he faded to 18th as drivers throughout the field nursed their tires to the finish. It was his second-straight top-20 finish and his 11th of the season.

Burton and the No. 21 team now turn their attention to Talladega Superspeedway and next Sunday’s YellaWood 500.