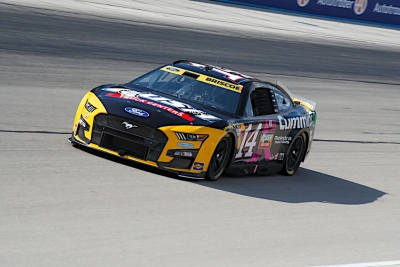 Playoff Standings (With two races to go before Round of 8):

●  Briscoe earned his fourth top-five of the season and his first top-five in two career NASCAR Cup Series starts at Texas.

●  This was Harvick’s 38th career NASCAR Cup Series start at Texas, the most among all drivers, past and present, in Texas’ 25-year history.

●  Harvick led once for nine laps to increase his laps-led total at Texas to a 691.

●  Tyler Reddick won the AutoTrader EchoPark Automotive 500 to score his third career NASCAR Cup Series victory, his third of the season and his first at Texas. His margin over second-place Joey Logano was 1.190 seconds.

●  Twenty-five of the 36 drivers in the AutoTrader EchoPark Automotive 500 finished on the lead lap.

“The first 90 percent of the race we were struggling. We couldn’t get the balance of the car right. We would be too loose or too tight and could never find where we needed to be. After that red flag I think the nighttime coming in kind of helped us a bit. With 80 to go we were hoping to catch more cautions and make it on fuel and we were able to get our track position that way and it ended up working out. We did what we needed to do for our Rush Truck Centers/Cummins Ford. We were not a fifth-place car. We weren’t even a 15th-place car. To steal some points like that is huge. Going to Talladega, we are not in a massive hole and that is the most important thing. We will go there and, hopefully, have a little luck go our way and see what happens.” – Chase Briscoe, driver of the No. 14 Rush Truck Centers / Cummins Ford Mustang

The next event on the NASCAR Cup Series schedule is the YellaWood 500 on Sunday, Oct. 2 at Talladega (Ala.) Superspeedway. It is the fifth race of the 10-race NASCAR Playoffs and the second race in the Round of 12. The YellaWood 500 starts at 2 p.m. EDT with live coverage provided by NBC and SiriusXM NASCAR Radio.