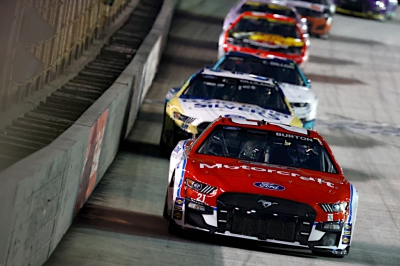 Harrison Burton and the No. 21 Motorcraft/Quick Lane team persevered through some early adversity to post a 16th-place finish in the Bass Pro Shops Night Race at Bristol Motor Speedway.

Burton started the 500-lap race from 27th place then had a flat tire in the early going that put him a lap down.

He worked his way into position to get the free pass at the end of the first 125-lap Stage and rejoined the lead lap for the start of the second Stage.

Just after the ensuing restart, Burton spun and had another flat tire after being collected due to contact between two other drivers.

He pitted for fresh tires and rejoined the fray.

On Lap 196, the No. 21 Mustang suffered another flat tire but another driver’s spin brought out the caution flag, which allowed Burton to again collect the free pass and get back on the lead lap.

He moved into the top 25 just past the 200-lap mark and continued to move forward, ending the second Stage in 15th place.

In the third and final segment of the race, he started 23rd but ran in or around the top 15 for the rest of the way, ending the race in 16th place.

Burton and the No. 21 team now head to Texas Motor Speedway for next Sunday’s Autotrader Echo Park Automotive 500.