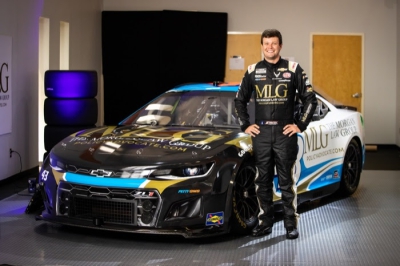 Today Petty GMS announced the addition of The Morgan Law Group as the primary partner on the No. 43 Chevrolet Camaro ZL1 for the Dixie Vodka 400 at Homestead-Miami Speedway on Sunday, October 23.

The Morgan Law Group, based in Florida, is a full-service law firm with its core focus on representing policy holders in insurance disputes, providing services throughout Florida, Mississippi, Louisiana and Puerto Rico. Collectively, the partners at The Morgan Law Group bring more than four decades of experience in handling property insurance disputes.

​​“We are excited to be a sponsor of Petty GMS, the No. 43 and Erik Jones at this year’s Dixie Vodka 400 in Homestead, Florida,” said Chris Berry, Chief Marketing Officer, “Petty GMS’s dedication to performance and commitment to excellence makes this partnership a natural fit.”

“This partnership will broaden our community awareness of The Morgan Law Group supporting homeowners and their property insurance rights across the country,” continued Berry. “We hope that NASCAR fans will call The Morgan Law Group when they need a policy advocate on their side.”

Jones will make his sixth Cup Series start at the 1.5-mile track when the series returns to Homestead-Miami Speedway in October. In his previous five starts at the track in the Cup Series, Jones has a best finish of third in 2019. In the Xfinity Series, Jones has two starts with a best finish of third in 2015, and in the Truck Series, Jones lone start at the track resulted in a sixth-place finish in 2015, the year he won the Truck Series Championship.

“We’re fortunate to have great partners on our Chevy Camaro this season,” said Erik Jones, driver of the No. 43 Chevrolet. “We’re excited to have The Morgan Law Group join us at Homestead and look forward to going out and putting on a great show. We’ve run well at Homestead in the past and with the momentum of strong runs on our side, we should be able to go out and contend for the win in our No. 43 The Morgan Law Group Chevy.”

Jones and the No. 43 The Morgan Law Group Chevrolet Camaro ZL1 will take to Homestead-Miami Speedway for the NASCAR Cup Series race on Sunday, October 23, beginning at 2:30 p.m. ET. NBC will carry live television coverage and Motor Racing Network (MRN) and SiriusXM NASCAR Radio will carry the live radio broadcast.