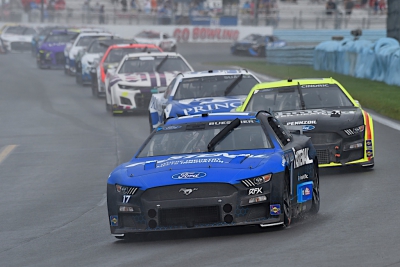 Chris Buescher again put himself in solid position on a road course, earning stage points Sunday at Watkins Glen before going on to finish ninth in the Fastenal Ford Mustang.

The Texan earned his seventh top-10 starting spot of the season in Saturday’s qualifying session, lining up seventh for the start of the 90-lap race. Inclement weather played a huge factor as lightning and heavy rain delayed the initial start, ultimately causing the race to start in the rain.

Despite starting on rain tires, Buescher was the first to switch to slicks as he hit pit road just five laps in. The No. 17 team elected a two-stop strategy in the first stage as Buescher hit pit road from the third position with three laps left in the segment. He went on to finish 17th in the 20-lap stage.

After staying out in the final stage break, Buescher fired off fourth at lap 43 as one of a handful of cars to employ similar strategy. He held onto the top five position for the next 12 laps until green-flag stops again were the storyline at lap 55. Two final restarts occurred in the last nine laps with Buescher coming from 10th to finish ninth. It marks his eighth top-10 of the season and fourth-straight on a road course.

The No. 17 team heads to Daytona International Speedway next weekend as the final opportunity to advance into the NASCAR Playoffs. Race coverage next Saturday night is set for 7 p.m. ET on NBC, MRN and SiriusXM NASCAR Radio.