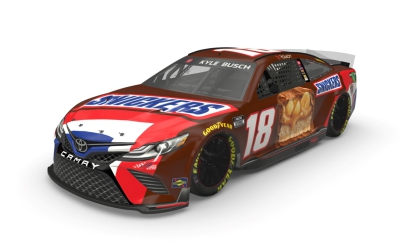 As the NASCAR Cup Series heads to Watkins Glen (N.Y.) International for Sunday’s Go Bowling at The Glen, road-course races have evolved from rare occasions to a vital part of the schedule for NASCAR Cup Series competitors in recent seasons.

That’s because Sunday’s race on the 2.45-mile, seven-turn Watkins Glen circuit will be the fifth of six road-course events on the schedule in 2022. For Kyle Busch, driver of the No. 18 SNICKERS Toyota Camry for Joe Gibbs Racing (JGR), the Las Vegas native always looked at the two traditional road courses at Sonoma (Calif.) Raceway and Watkins Glen as a racing vacation for NASCAR’s top series, providing the chance to turn left and right for a couple of weekends each year. Now, with six of 36 races run on road courses, turning left and right is as important as short-track racing, which occupies six races on the schedule with two apiece at Richmond (Va.) Raceway, Bristol (Tenn.) Motor Speedway, and Martinsville (Va.) Speedway each year.

For Busch, the two-time Cup Series champion, Watkins Glen is one of his favorite road courses on the schedule. He’s brought home two victories, seven top-five finishes, and 13 top-10s in 16 starts there.

After his inaugural Cup Series victory at The Glen in 2008, he nearly won for the second time in his 2011 and 2012 visits before finally breaking through again in 2013. A third career victory Sunday in New York’s scenic Finger Lakes Region would continue to solidify Busch and the SNICKERS team as a contender each time the series comes to town.

So as Busch heads to Upstate New York for another round of road racing this weekend, he would like nothing more than to bring home a third win there, which would be a timely victory with only two regular-season races remaining before the 2022 Cup Series playoffs begin on Labor Day weekend. And Busch is certainly “hungry” for a win with his SNICKERS Camry as he looks for some momentum with the playoffs looming.