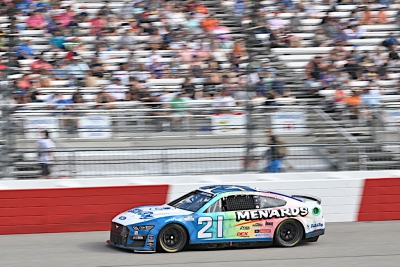 Burton started the 300-mile race from the rear of the pack after the team changed the master switch prior to the green flag.

Starting at the rear on a short track often leads to a lost lap in the early going, but Burton hung on to the lead lap and ended Stage One, a 70-lap segment, in 26th place and on the lead lap.

After a stop for fresh tires and fuel, he lined up 23rd for the start of the second Stage. With the team employing a strategy of being among the first to make pit stop under the green flag, he wound up 22nd in that 160-lap segment.  There were no caution flags during that Stage, and Burton fell a lap behind the leaders.

In the third and final segment of the race, the Menards/Dutch Boy team took a gamble on pitting later in an attempt to unlap themselves, but the race didn’t play out in their favor. They eventually wound up three laps down at the checkered flag.

Burton and the Wood Brothers team now turn their attention to the road course at Watkins Glen, N.Y., and next Sunday’s Go Bowling At The Glen.