Keselowski Finishes 15th in Up and Down Richmond Race 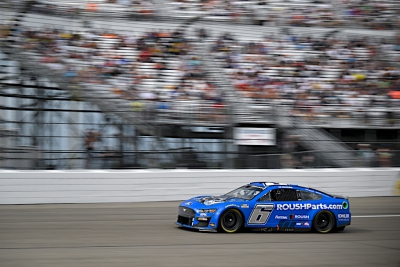 Brad Keselowski put the ROUSHParts.com Ford to the front of the field early Sunday afternoon at Richmond, thanks in part to a solid qualifying effort on Saturday, running inside the top five early before going on to finish 15th.

Keselowski posted a P8 qualifying effort on Saturday – his best to date outside of Daytona – and took advantage of the early track position, which proved to be vital throughout the afternoon. He powered the No. 6 to the fourth spot by the end of stage one earning solid stage points early.

Following service under the stage break, Keselowski lined up ninth, then a series of two green-flag pit stops cycled in the stage as he ultimately finished 11th in the segment. From there, Keselowski still maintained solid track position restarting 11th, and was eighth at the time of the race’s final restart at lap 256, but faded late despite another pair of green-flag stops to finish 15th.

Watkins Glen stands as the No. 6 team’s next opportunity, with race coverage next Sunday set for 3 p.m. ET on USA. Coverage can also be heard on MRN and SiriusXM NASCAR Radio.