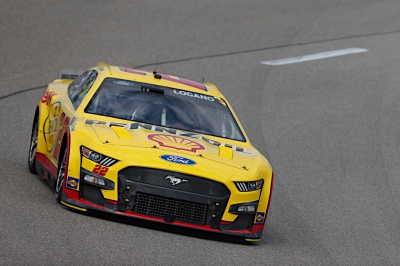 Race Rundown: Austin Cindric and the No. 2 Menards/Duracell team netted a 12th-place finish after putting up a resilient fight Sunday at Richmond Raceway. Cindric rolled off the grid 33rd in the lineup but wasted little time on his quest to advance up the leaderboard. By lap 15, the Menards Ford had reached 25th, but settled into that position through the end of Stage 1. Receiving four tires, fuel, and adjustments to kick off Stage 2, Cindric navigated the 160-lap segment to position himself in the 17th position at the end of the second segment. Undergoing various pit stops over the course of the final stage, Cindric continued to gain track position, leading him to a 12th-place finish.

Cindric’s Thoughts: Certainly, it was interesting no doubt starting near the rear of the field. Proud of the hustle from my Menards guys all day to make the car better and move forward. We’re making good progress and look forward to Watkins Glen.”

Race Rundown: Ryan Blaney drove the No. 12 BODYARMOR Ford Mustang to a 10th-place finish on Sunday afternoon at Richmond Raceway. At the drop of the green, Blaney used some calculated moves to drive from his 10th-place starting spot to sixth early on. From there, he would hold court and finish sixth in the first stage. Excellent work by the BODYARMOR team would get him out fourth as the second stage started. Despite falling back a few spots early, Blaney ran solidly in the top-five for all of Stage 2, despite a car that was becoming more and more ill-handling in traffic. A couple of early cautions at the start of the final stage slightly shuffled pit strategy, with Blaney getting off sequence on tires and battling back from 10th. He would settle into ninth while fighting a BODYARMOR Mustang that drastically changed handling characteristics in the second half of the race. Blaney would fall back to 13th but battled back to finish 10th.

Blaney’s Thoughts: “Big thanks to everybody on the BODYARMOR Ford Mustang. I’ve been coming to Richmond a long time and would’ve been excited with 10th but for sure wanted to get a bit more this time. Just proud of everybody on the crew sticking with me all day and look forward to the next two races. I think we’ve got great shots at Watkins Glen and Daytona, and we’ll be prepared for anything.”

Race Rundown: Joey Logano and the No. 22 Shell-Pennzoil Ford Mustang team had a dominant car in the middle portions of the race but fell back late and finished sixth at Richmond Raceway on Sunday. Early in the race, Logano used some very aggressive moves in the second lane to drive into the top-eight just 15 laps into the race. Logano would end the first stage in the seventh position. He would have an amazing restart at the beginning of stage 2 from his sixth place restarting position and took the lead on lap 81. Logano would lead through green flag stops during the second stage and only briefly gave up the top spot as the stops cycled out. Keeping a nearly two-second buffer, Logano would take the Stage 2 victory. Logano briefly fell back to second to begin the final stage but retook the lead shortly thereafter and began working to save his tires. Fellow Ford driver Kevin Harvick began to track Logano down, taking the top spot with less than 70 laps to go. Logano quickly brought the Shell-Pennzoil Mustang to pit road for what would be his final stop of the day. However, over the long run to end the race, the Shell-Pennzoil Ford slipped back to sixth at the finish.

Logano’s Thoughts: “Yeah, I think just as the sun went down and the track cooled off and lost some turn on our car. Kevin (Harvick) and some others got a lot better the last couple of runs in the race. When it was hot and slick that was probably our strength with the Shell-Pennzoil Mustang. We had good turn and then once it cooled off, we lost the turn but still weren’t really good on the exits. Then you start playing defense and running too hard. It was a downhill slope from there. I was hoping for a late race caution, that was our only prayer at the end there. Overall, we got a stage win and playoff points and that is something to be proud of. It stinks when you say we led 222 laps but not the right one.”