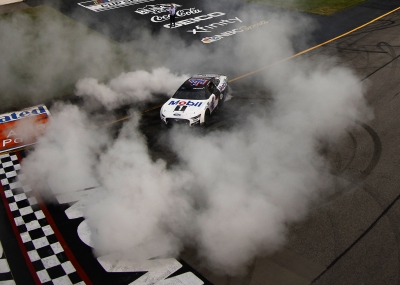 Kevin Harvick celebrating after winning back to back races after being winless for the past year and a half. Getty Images

Just a few weeks ago, Kevin Harvick was considered to be past his prime with the lack of success that Stewart Haas Racing has had. Now he has back to back wins and could be the one holding the championship trophy in Phoenix if momentum sticks with him.

“The cars have been running good week in and week out,” quoted Harvick talking to NBC Sports. “You see that we have a much better understanding of what’s going on with how we adjusted on the car after the first run and were able to get our car handling a lot better.”

Christopher Bell finished second in the event, but could have possibly passed Harvick before the finish if lapped cars and more laps were in his hands. Harvick continued by saying, “I think as it got dark, the racetrack really came to our Mobil 1 Ford Mustang. Just got to thank Mobil, Busch Light, GearWrench, Hunt Brothers, Rheem, Ford, Xfinity, Morton Buildings, E-Z-Go, everybody who helps Stewart Haas on this No. 4 car.”

The 400 laps at Richmond was a strategy fest to begin with, as when to pit was the name of the game. While the racing on the 0.75 mile track in the commonwealth of Virginia wasn’t a crash fest like a Martinsville or Bristol might be, it did bring some sort of entertainment.

Kyle Larson, who was the only Cup Series driver to compete in the Knoxville Nationals the night prior, started his Chevy Camaro on the pole alongside Ross Chastain, who would lead lap one. Four laps later, Tyler Reddick brought out the first caution after a spin in turn four. The race then restarted with Chastain still up front, and he would lead the race under the green flag condition to win stage one on lap 70.

On lap 79 the race restarted and stayed green til the end of stage two on lap 230. Over the course of the 160 green flag laps, several drivers like Joey Logano, Chase Elliott, and Kyle Larson had their fair share of leading the race as pit stops occurred. Logano would end up winning stage two.

After the restart, Kyle Busch went for a spin in turn four with the help of Chastain, later speaking to the media saying, “I just got Chastained.” When the race went green once again, it wasn’t long before Christopher Bell spun at the same spot his teammate did early, this time by himself.

The rest of the 144 laps of the 400 lap event were run under cloudy conditions, which seemed to help Harvick later on in the race. After a few different leaders like Hamlin and Logano took the lead due to pit strategy, Harvick still looked like he had the win in his hands. He did have a chance to lose it though, with Chris Buescher for RFK Racing running in the top five as well as Christopher Bell with a late charge, But ultimately, Harvick would win his second straight race, and his 60th career win overall.

The race would be three hours, three minutes, and 27 seconds long, with an average speed of 98.11 mph. Next week, the stars of the NASCAR Cup Series head to the Finger Lakes region of New York, and will compete at the Watkins Glen International road course in the Go Bowling at the Glen. That race will start at 2 p.m. Eastern on USA, MRN, and SiriusXM NASCAR Radio.