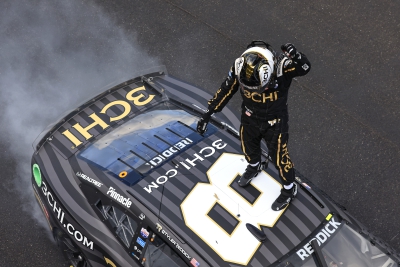 On a dominant day that almost wasn’t, Tyler Reddick earned his second career Cup victory, winning in the Cup Series’ return to road racing after his triumph at Road America on Fourth of July weekend.

Despite leading a race-high 38 laps, Reddick almost lost hold of his victory on the final restart.

Trackhouse Racing’s Ross Chastain missed Turn One, deciding to charge ahead and use the access lane instead. By making the move, he was able to nose ahead of Reddick into Turn Three, though Reddick was able to pass him back in a frantic dash with two laps remaining.

“Just trying not to be in the carnage there in Turn One – I thought we were four-wide,” Chastain said of the evasive maneuver. “(I) couldn’t go any farther right and just decided to take the NASCAR access lane.”

Chastain was ultimately issued a penalty by NASCAR, relegating him to a 27th place finish.

With his second victory, Reddick now sits firmly in the Playoffs with four races remaining in the regular-season.

“I was like ‘uh-oh,’ but that was a scenario that had been talked about,” Reddick said of losing the lead briefly to Chastain via the access road. “I couldn’t believe he got ahead of me, I was kind of waiting to see if he was going to have a penalty …

“Just really glad to be able to do it here in Indianapolis. This is one really special place to race, (and) really excited to be able to kiss the bricks.”

As a result of Chastain’s penalty, Daytona 500 Champion and Cup rookie Austin Cindric came home in the second position, his second top-five result in the last four races.

Fellow rookies Harrison Burton and Todd Gilliland were also able to survive the carnage of the day, finishing third and fourth, respectively; it was each driver’s best career finish.

Championship-leader Chase Elliott was running second to Reddick on the second-to-last restart, but was spun and finished 16th.

Looking to the Playoff picture, Ryan Blaney and Martin Truex Jr. were able to expand their leads over Stewart-Haas Racing’s Kevin Harvick, who had multiple run-ins with Hendrick Motorsports’ Alex Bowman during the race, causing Harvick to finish 33rd.

Blaney – who was also spun while contending late – has a 121-point cushion over Harvick, while Truex has a similarly comfortable 96-point advantage.

In the hardest crash of the race – and one of the hardest in recent memory – Kyle Larson had an undisclosed failure with his car, causing him to destroy the right-side of Ty Dillon’s Chevy Camaro while making the right-hander into Turn One; both drivers were OK after the incident.

Stage One was won by Indiana-native Chase Briscoe while Stage Two was won by Christopher Bell. Bell led 17 laps but had trouble on a restart late and finished 12th.

Elliott retains his lead in the standings by 125 points over Blaney.

The NASCAR Cup Series returns to action next Sunday with the FireKeepers Casino 400 at Michigan International Speedway. Coverage begins at 3 p.m. ET on USA.