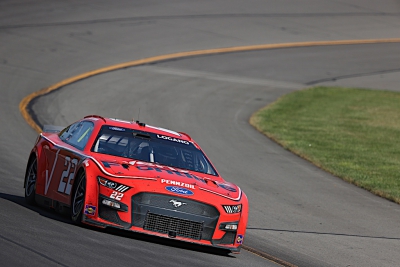 Race Rundown: Austin Cindric started 20th and finished 31st in Sunday’s race at Pocono Raceway. The driver of the Keystone Light Ford Mustang had a spin off turn 3 on lap eight and contacted the inside wall. The Keystone Light crew made repairs to the suspension and Cindric would solider home making up five spots in the process to finish 31st. Cindric now sits 15th in the NASCAR Cup Series standings.

Cindric’s Thoughts: “Tough day for the Keystone Light Ford Mustang. I work with some talented people that deserve a beer (or two) and a better result. Proud of my boys. I’m ready for Indy.”

Race Rundown: Ryan Blaney started sixth and finish 33rd in Sunday’s NASCAR Cup Series race at Pocono Raceway. The driver of the Menards/Duracell Ford Mustang led seven laps on the day. In stage 1 the Menards crew opted for stage points coming home in sixth. Stage 2 saw the 12 team catch a timely caution after service. Restarting on the front row, Blaney would finish second in stage 2. He would restart the final stage from the third position. Unfortunately, he would experience a flat tire going into turn 1. His day would come to an end on lap 139 after a hard hit off turn 3. Blaney sits third in the NASCAR Cup Series standings.

Blaney’s Thoughts: “I just got loose. It was one of those things. You get loose off three and think you can save it, but you can’t. I just couldn’t save it. Gosh, I hate it for everyone on the 12 group. We finally got the car decent, and we were running top five there and had a flat tire and had to come in and then I just tried too hard and it stepped away from me. I hate it for Menards and Ford and everybody. That was my mistake. We will go at it again next week.”

Race Rundown: Joey Logano started 14th and finished 20th in Sunday’s NASCAR Cup Series race at Pocono Raceway. The driver of the Verizon Ford Mustang struggled with balance issues much of the day. Logano would run inside the top-20 much of the first stage opting to pit prior to the stage break, he would finish 17th in Stage 1. Logano would still struggle with the balance the remainder of the day coming home 22nd in Stage 2 and 20th at the finish. Logano sits seventh in the Cup Series standings.

Logano’s Thoughts: “Really tough day for the Verizon Ford Mustang. We just couldn’t get the balance where we needed it. We’ll put it behind us and look toward Indy.”