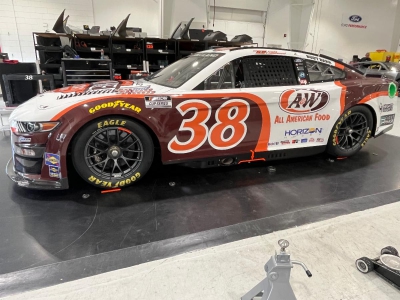 A&W Restaurants, Front Row Motorsports and Todd Gilliland will help spread the message of an important summer date this weekend at the Pocono (Pa.) Raceway. They join forces to remind fans of National Root Beer Float Day on August 6.

The familiar look of the A&W Restaurants National Root Beer Float Day Ford is back on the No. 38, but this time it is special for Todd Gilliland. His father, David, also raced the A&W Ford in 2014, also on the No. 38 Ford.

“It’s awesome every time the A&W Ford comes back to the track,” said Gilliland. “The fans love this scheme and the promotion of National Root Beer Float Day. It is so much fun and who doesn’t love a root beer float from and A&W?!”

“It is always special to do something that my father has done in the past,” continued Gilliland. “So, if I get to run a cool scheme that he raced, that is super cool for our family. I want to thank A&W Restaurants for this opportunity.”

On the track, Gilliland is eager to make first NASCAR Cup Series start at the track known as the “Tricky Triangle.”

“Pocono has definitely earned the reputation of its nickname,” stated Gilliland. “You really have to approach this track different than any others because of the tight corners and long straightaways. We had good runs in the NASCAR Camping World Truck Series, hopefully I can translate to the Cup side.”

Gilliland and the A&W Restaurants National Root Beer Float Day Ford Mustang will race the Pocono Raceway this Sunday at 3:00 p.m. ET on the USA Network.