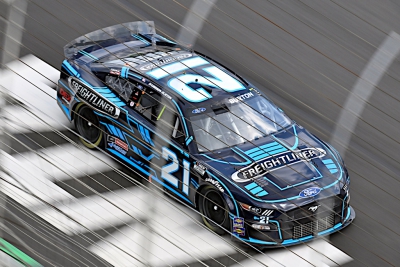 Harrison Burton and the No. 21 Freightliner team kicked of the second half of their rookie Cup Series season with an impressive performance in Sunday’s Quaker State 400 at Atlanta Motor Speedway.

For the second week in a row, Burton scored Stage points and led the race, and on Sunday came away with a 10th-place finish, the best of his brief Cup Series career.

Burton had to start the 400-miler from 27th place after rains on Saturday washed out qualifying and the line-up was set by metrics based on recent performances.

He fell back a bit in the beginning and was running 29th when the Competition Caution flag flew at Lap 26. Crew chief Brian Wilson elected to stay on the track as others headed to pit road. That propelled Burton into the top 10 for the restart.

The rookie driver ran in the top 15 for most of the remainder of Stage One, eventually ending that 60-lap segment in 19th place.

Burton made a pit stop during a caution period at Lap 80 and was running 15th when another caution flag flew 12 laps later for a multi-car crash.

Wilson’s decision to stay on the track at that point put Burton on the pole for the restart, and he wound up leading two times for a total of nine laps, the most he’s led in his Cup career.

From that point on, Burton and the No. 21 Freightliner Mustang were a consistent top-10 and top-15 competitor, and he ended the second Stage in seventh place, earning four Stage points.

He held his place in the lead pack for the remainder of the race and lined up 14th for a restart with three laps remaining. Steering clear of a crash ahead of him on the white flag lap netted him four spots and earned him the first top-10 finish of his Cup career.

Eddie Wood said everyone on the No. 21 team deserves congratulations for their work at Atlanta.

“Harrison did a great job in the car,” Wood said. “Brian made great calls all day, and the pit crew was flawless.

“It was all good. I’m looking forward to the rest of the season.”