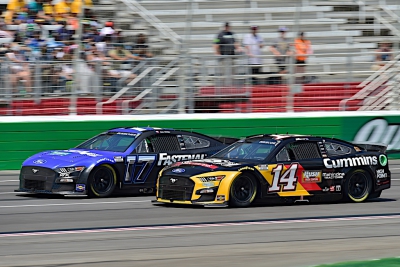 The bad luck fell Chris Buescher’s way Sunday afternoon at Atlanta Motor Speedway after he had speed in the Fastenal Ford, but was caught up in an incident midway through the race, with a mechanical failure ultimately ending his afternoon.

He began the day near the front in 11th after qualifying was washed away Saturday morning. The metric determined by NASCAR put him with a solid vantage point for the start of the 260-lap event.

Buescher maintained a patient approach for the first stage ending it in 26th, then rolled off 28th for the second segment. Just 18 laps into the second stage, the No. 78 went spinning and Buescher ultimately spun and made contact, which required some damage repairs on pit road.

He lost a lap to the leaders in the sequence, but got it right back just a few laps later as the big one at Atlanta ensued at lap 92, a wreck that involved nine different machines. Buescher restarted back on the lead lap just prior to lap 100, then a few laps later blew a right front, ultimately ending his day early.

The Cup Series heads to New Hampshire Motor Speedway next for a 3 p.m. ET race next Sunday. It will air on USA Network, and can also be heard on PRN and SiriusXM NASCAR Radio.