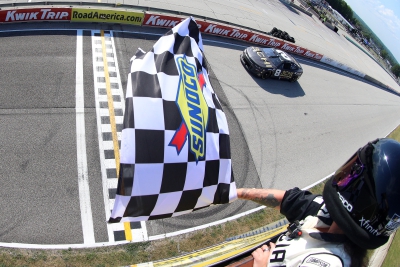 Tyler Reddick (No. 8) driving up the steep front stretch at Road America to take his first checkered flag in the NASCAR Cup Series this past Sunday. Logan Riley/Getty Images

Since his tenure in the Xfinity Series, Tyler Reddick had the makings to become a NASCAR phenom in the future. One would only expect that after his two Xfinity Series Championships for JRM and RCR in ‘18 and ‘19, that he would bring tons of momentum over to Richard Childress Racing No. 8 Chevy Camaro in his rookie year in 2020 and be in contention to win every week.

While that is the case, he never did get his luck turned around to put his car into victory lane after so many times he dominated week by week. That is until this past Sunday on the fourth of July weekend, that Reddick pulled his Caterpillar Chevrolet into victory lane, at one of the most historic road courses in the United States.

“It was just a huge sense of relief,” said Reddick in the media center after scoring his first Cup Series win. “This whole team, we’ve been at it for a couple years now together, and even some of us back to the Xfinity Series days. A lot of great people have helped an immense amount along the way, and it’s just — what a crazy ride it’s been, and just had to put a lot into it. All of us have. It’s really nice to get it finally done.”

The race throughout the day was a clean event to say the least, as the only cautions were for the two stage breaks in the middle of the event, and only two laps were run under the yellow flag conditions. Only three cars in the event out of the 37 entered had mechanical issues throughout the race. Loris Hezemans in the No. 27 car for Team Hezeberg with fuel pump issue), and Bubba Wallace in the No. 23 for 23XI Racing as well as Austin Dillon in the No. 3 for Richard Childress Racing (brake issues).

Reddick had to battle the road course king of Chase Elliott, who had dominated the race up by leading 36 of the 62 laps, and passed him on lap 48 to lead the final 16 laps of the event and earn his first win in NASCAR’s top division. Elliott started on pole and looked unstoppable on the track, even when his car started to develop a steering issue throughout the 250 miles at Elkhart Lake, Wis.

The main question after Sunday’s festivities at the famed circuit is if it will or will not be a part of the 2023 calendar when it gets released later on this summer. Ton’s of talk throughout the media is that it will be replaced with a shorter 2.2 mile track in the streets of Chicago. But did the quiet paced race at Road America seal the deal for it to be on the new and improved schedule? Or did it dig its own grave? Only time will tell if NASCAR belongs in the cheese state.

Next week, NASCAR returns to the famous Atlanta Motor Speedway in Hampton, Ga., and the new configuration of the 1.5 mile track that drives more like a Superspeedway track. That race will be carried live on USA, PRN, and SiriusXM NASCAR Radio, starting around 3 p.m. Eastern.