Film Offering An Insider’s Look At One Of The Most Successful – And Controversial - Drivers In NASCAR History Races Into Theaters Nationwide For ONE NIGHT ONLY – June, 29th 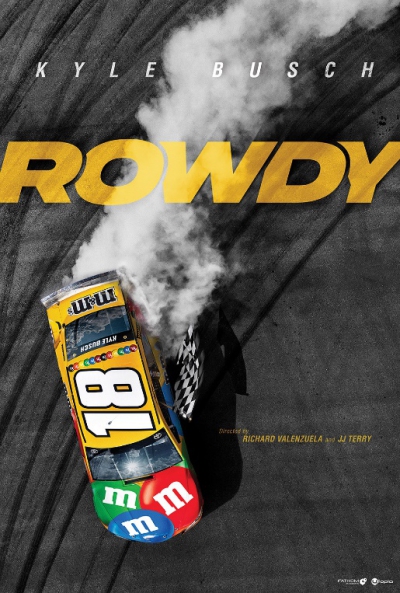 ickets are on sale now for ROWDY, the acclaimed documentary providing a special look at Kyle Busch’s unmatched talent and singular determination to win at everything while giving candid insights from family, friends and NASCAR personnel on his life and career. Busch confronts his physical limits when he sustains a potentially career-ending wreck in 2015, only to find a path to win the series championship that same season. His journey is ranked as one of the greatest sports comebacks of all time.

Tickets for ROWDY can be purchased at www.FathomEvents.com or participating theater box offices. Fans throughout the U.S. will be able to enjoy the event in select movie theaters; for a complete list of theater locations visit the Fathom Events website (theaters and participants are subject to change). Please contact your local theater for individual safety precautions.

Busch’s irreverent and polarizing personality, whether in or out of the driver’s seat, has earned him both diehard fans and vehement detractors, though his accomplishments are irrefutable.

“I never thought I would ever do a film about my career until after I retired,” Busch explains. “I know there are some pivotal moments in my life that are misunderstood by fans. This film sets the record straight about what went on in my mind and many people who were a part of those pivotal moments that changed me.”

“Fathom’s partnership with Utopia has delivered amazing and insightful content that has drawn in movie-goers across the country,” said Ray Nutt, CEO of Fathom Events.  “This high-octane journey, riding shotgun with the controversial, yet infamous, Kyle Busch, is no different – we’re excited for it!”

ROWDY is produced by Chance Wright of Wright Productions along with Hans Schiff and John Stevens of Venture 10 Studio Group.