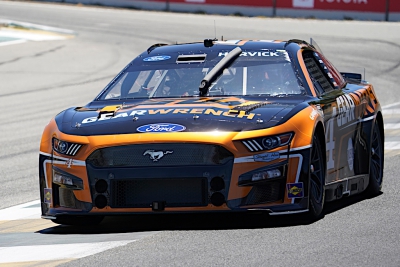 ●  Briscoe earned his eighth top-15 of the season and his first top-15 in two career NASCAR Cup Series starts at Sonoma.

●  Almirola earned his ninth top-15 of the season and his fourth top-15 in 10 career NASCAR Cup Series starts at Sonoma.

●  Suárez is the 12th different winner and the fourth first-time Cup Series winner in the 16 races run this season.

●  Suárez joins Juan Pablo Montoya (June 2007) as the second driver to win his first career NASCAR Cup Series race on the 1.99-mile Sonoma road course. He is the first driver from Mexico (Monterrey) to win in the Cup Series, and the fifth different driver all-time not from the United States to win a Cup Series race, joining Marcos Ambrose (Australia), Montoya (Colombia), Earl Ross (Canada) and Mario Andretti (Italy).

●  There were four caution periods for a total of 14 laps.

●  Chase Elliott remains the championship leader after Sonoma with a 16-point advantage over second-place Ross Chastain. Only 10 races remain in the regular season before the start of the 10-race, 16-driver NASCAR Playoffs.

“A few more laps and I think we would’ve had a top-10. Our long-run speed was really good today. The timing of the caution in the last stage wasn’t in our favor, so we had to battle back. Those last few laps we really had the speed. Proud of this Farmer John Ford team for putting together a really good points day. Ready for an off weekend.” – Aric Almirola, driver of the No. 10 Farmer John Ford Mustang

“Another solid day taken away late after getting spun in turn 11. The guys brought a fast Autodesk/HaasTooling.com Mustang, but nothing to show for it. I don’t think I’ve ever had a year where so many things just don’t fall right. Ready to regroup after the off week and get it turned around.” – Cole Custer, driver of the No. 41 Autodesk / HaasTooling.com Ford Mustang

The NASCAR Cup Series gets a well-deserved weekend off before returning to action on Sunday, June 26 for the Ally 400 at Nashville (Tenn.) Superspeedway. The race starts at 5 p.m. EDT with live coverage provided by NBC and SiriusXM NASCAR Radio.