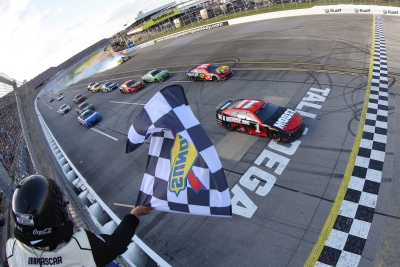 Friday’s Truck Series Charlotte winner and resident watermelon farmer in the NASCAR garage, Ross Chastain, has ascended to the top of the Cup Series in short order.

Chastain – driving for second-year Trackhouse Racing – has victories at Circuit of the Americas and Talladega, to go along with seven top-fives and eight top-10s through 13 Cup races.

With the hot start, Chastain has sent a message to the field through the first half of the regular-season:

He is a bona fide championship contender.

The question, though, must be asked: Are we really surprised?

Chastain has long been revered for his ability to get the most out of his typically subpar equipment. Whether it was driving for Premium Motorsports in Cup or Johnny Davis in the Xfinity Series, and to a lesser extent Niece Motorsports in Trucks, NASCAR fans, drivers and pundits alike have known this to be true for several years.

So it wasn’t terribly surprising, then, that when he got his first big opportunity in 2018, he didn’t disappoint.

Driving in three Xfinity races for Chip Ganassi Racing, Chastain won one race; finished second in another; led 270 laps; earned a pole; and won four stages. And those numbers don’t even tell the full story.

Chastain dominated the first two stages at Darlington only to get tangled up with not-so-happy Kevin Harvick, relegating him to a 25th place finish that day.

All of that led to the announcement that Chastain would drive full-time for CGR’s Xfinity program in 2019. Early that year, though, the owners of car sponsor DC Solar had items seized from their headquarters and personal home by the FBI, and were later found to have run a Ponzi scheme to the tune of $1 billion.

Because CGR was forced to shutter its Xfinity operation, Chastain wound up running a partial Xfinity schedule that amounted to 13 starts for Johnny Davis, and six for Kaulig Racing.

Midway through that season, Chastain switched his points declaration to the Truck Series as he was also driving full-time for Niece (not to mention a full-time Cup schedule for Premium).

As it were, Chastain had to go from zero to hero, starting with zero points eight races into the Trucks regular-season because of the switch, leaving him with just eight races to reach the top-20 in points and win a race to make the Playoffs.

He was able to do it with two (three?) race wins in addition to his win at Kansas prior to the points change. At season’s end, Chastain finished two on-track positions short of hoisting the championship trophy that was ultimately won by the winless Matt Crafton.

Perhaps more clearly than ever, it was evident that the watermelon man could wheel a race vehicle.

Along came 2020, and Chastain found his full-time home in the Xfinity Series with Kaulig Racing – it was with that team he won the July Daytona race the season prior while lighting the Trucks world on fire.

Though he didn’t find victory lane, he was able to amass 15 top-fives and 27 top-10s in 33 races, finishing seventh in the final standings.

That earned him a promotion – and return – to CGR full-time in Cup a season ago, replacing the departed Kyle Larson as he moved over to Hendrick Motorsports.

While the numbers didn’t necessarily show it – three top-fives and eight top-10s – Chastain found speed throughout the latter portion of last season and had reason to be optimistic that Justin Marks would hire him to drive his second car at Trackhouse after purchasing Ganassi’s NASCAR assets.

Hire him he did, and Marks has reaped the rewards throughout the first half of 2022 and the debut of the Next Gen car.

Chastain is tied with William Byron for the most wins in Cup (2); has the fifth-best average finish (13.5); has led the fourth-most laps (273); and sits fifth in traditional points (second on the Playoff grid).

For a second-year Cup operation, even the visionary Marks couldn’t have possibly expected this much early success from Chastain.

But again, we should no longer be surprised; that is why I will leave with this declaration:

Chastain will plant the (watermelon) seeds necessary and win the Cup Series championship in November.