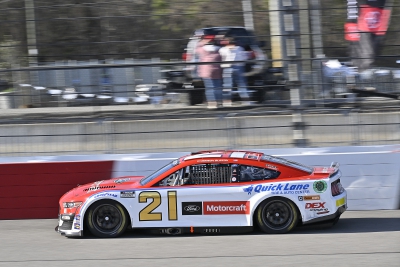 Harrison Burton and his No. 21 Motorcraft/Quick Lane Mustang are set to start Sunday’s Coca-Cola 600 at Charlotte Motor Speedway from the inside of row nine.

Burton took that spot with a lap at 180.814 miles per hour in qualifying Saturday evening.

His speed in qualifying substantially bettered his time from practice earlier Saturday with a lap at 178.253 mph, which he ran on the third of 25 laps ran in the session.

The Motorcraft/Quick Lane Mustang was eighth best in speed on a 10-lap-consecutive run. Burton averaged 176.566 mph during his first 10 laps on the track.

This weekend, Burton and the Motorcraft/Quick Lane team are honoring the late U.S. Air Force Capt. Jason Ramsey from South Boston, Va., as part of the 600 Miles of Remembrance program. That effort is part of NASCAR’s Memorial Day weekend recognition of those who lost their lives in service to the United States of America.

The Coca-Cola 600 is scheduled to start just after 6 p.m. eastern with TV coverage on FOX.