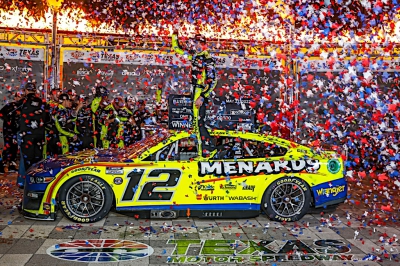 It took two attempts before Blaney would win the race. As Blaney was approaching the finish line, NASCAR threw out the caution for Ricky Stenhouse Jr. who made contact with the outside wall in Turn 2.
Overtime rules for this years All-Star Race stated that the race must end under green flag conditions. Since Blaney was not yet across the finish line, the race would be sent into overtime.
Blaney had thought the race was over and doing so he unhinged his window net believing that he had won the race. It would take Blaney the entire caution flag to get his window net secure enough to not be sent down pit road by NASCAR.
In the overtime finish, Blaney would hold off Denny Hamlin and Austin Cindric to win the million dollar prize. Blaney would lead the final 84 laps of the race.
Rounding out the top five were Denny Hamlin in second, Austin Cindric in third, Joey Logano in fourth and Daniel Suarez in fifth.
Denny Hamlin who finished second, was noticeably upset with NASCAR’s decision to not have Blaney come down pit road to fix his window net.
“He (expletive) was holding the latch up.”
Hamlin would also take to Twitter to show his displeasure about NASCAR’s call to throw the the caution and not to take action on Blaney’s window net.

Never should have been a yellow in the first place. They put Blaney in the situation he was in. To make up for it they let him break a rule. 2 wrongs don’t make a right.
Blaney W, NASCAR L

The originally scheduled 125 lap race was 140 laps due to on-track incidents. The most serious on-track incidents when race leader Kyle Busch got a flat right rear tire at the Turn 4 exit. Busch attempted to get out of the way of other drivers but wounded up in the path of Ross Chastain. Chastain would launch over the left rear of Kyle Busch’s car. The wreck would also collect Chase Elliott as well.
The NASCAR Cup Series heads to Charlotte Motor Speedway on Sunday, May 29th. at 6:00 p.m. Eastern on FOX.
Stage 1 Winner: Kyle Busch
Stage 2 Winner: Austin Cindric
Stage 3 Winner: Ryan Blaney
Race Winner: Ryan Blaney
Rate this item
(1 Vote)
Tweet
« Post-Race Report | Texas Motor Speedway Ryan Blaney wins the 2022 NASCAR All-Star Race at Texas Motor Speedway »