From One Hot Night to one hot mess, NASCAR needs to revamp the All Star Race Featured 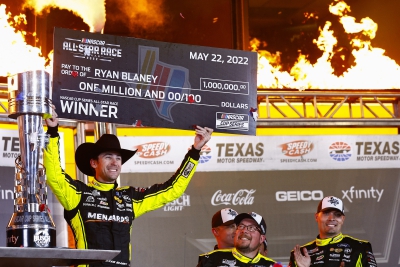 Ryan Blaney, who drives the No. 12 Ford Mustang for Team Penske, in victory lane after winning the controversial 2022 NASCAR All Star Race at Texas Motor Speedway this past Sunday. Photo by Jared C. Tilton/Getty Images

The famed race has also been known to try new things as it has no effect in the regular season standings. In 1987, NASCAR changed its format to include 'stages’ during the race, which was later brought into the regular season 30 years later in 2017. In 1992, CMS installed lights to have the race in prime time, also known as ‘One Hot Night’. In 2009, NASCAR introduced double file restarts, and three weeks later, was implemented at Pocono Raceway in the second week in June. Great things have come out of the All Star event, and great racing as well.

In recent years though, it has seemed that the All Star Race itself has been a lackluster event. In fact, even some fans have wanted the event scrapped from the schedule, which is a shame in which the event was built for the fans. Especially after last Sunday’s showing of the event with it being the worst race so far in the 2022 season, things need to be changed and changed fast. Luckily, it can be saved, and can once again be one of the top events on the NASCAR schedule, but it will need to be revamped before it can be done.

1: Enough of the silly formats

The one thing that can not happen again is for the format to feel gimmicky and confusing. You know there is trouble when even some people who have been involved with NASCAR have no idea how the race will be run this year. Enough of that, and the people who love the sport don’t care for it. Make it a simple format, that doesn’t take the credibility and the integrity of the sport into places it doesn’t need to be. The race should be run with a simple format, so that even the casual fan who doesn’t know the difference between a stock car and a sprint car can easily tell what is happening.

2: The race needs a home

I know that the NFL’s Pro Bowl, and both the MLB’s and the NBA’s All Star games are held in different venues every year, but we are not stick and ball sports, and we shouldn’t try to be. While the sport is glad that it has changed from Charlotte to Bristol after a 30 year stint, it should have a home and it isn’t at Texas Motor Speedway. But here is the kicker, let’s move to a track that no one is currently racing at. That way, no team who is involved with the All Star Race has no data or past knowledge on how to win from a previous event less that a year earlier. It would certainly shake things up, and maybe provide the race to be held at a unique venue.

Dave Moody from MRN and the host of SiriusXM Speedway on SiriusXM NASCAR Radio has brought up this idea, and it has some weight to it. NASCAR should open the All Star Race up to the top 10 in points in the Cup, Xfinity, Trucks, and even the ARCA national series. That way the top 10 ‘All Stars’ from the top four series in the NASCAR’s banner will compete in a race meant for the best of the best. How neat would it be to have an ARCA driver like Nick Sanchez who won last week at Kansas, race against Ben Rhodes from the Truck Series, Noah Gragson from the Xfinity Series, and Kevin Harvick from the Cup Series? NASCAR has a unique opportunity that could pay off in the long haul. You could make the race a 250-300 mile event, and run the race almost like the IMSA Weathertech Sportscar Championship with four classes and an overall winner. Not only will it be different, it will be historic for sure.

4: My opinion on how the All Star Race should be

Imagine this. Let’s hold the event mid week like the 2020 All Star Race was held on a Wednesday night before the Coca-Cola 600 at Charlotte, with the top 10 in points from the previous race of ARCA, Trucks, Xfinity, and Cup allowed to compete. The race will be 250 laps with two stages, one on lap 100 and the next on lap 200, with a 50 lap shootout to determine who the All Stars really are. And where will this Wednesday night shootout be held? None other than the historic North Wilkesboro Speedway in North Wilkesboro, N.C.

The track has recently announced plans to hold events in August and October, with a new repave to take place before the 2023 racing season begins. With all of the positive momentum the historic ⅝’s of a mile is getting these days, why not reward them with a race date of their own? Plus, the crowd that was at Texas Motor Speedway this past Sunday could easily fit in the grandstands at North Wilkesboro. Not only would the first running of the event at the track be historic, but it might get people to love the All Star Race again.

Things need to be fixed in NASCAR, and it’s that hard to do. Luckily, NASCAR has a chance to save some things from diminishing away like some of the other great things that have made the sport what it is today. I personally believe if NASCAR can make these changes to the All Star race, it could be saved and cherished forever.