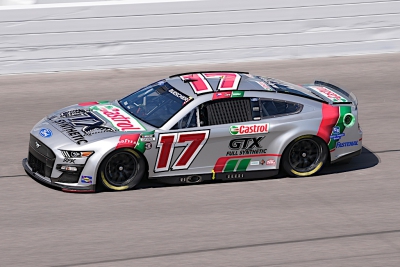 Chris Buescher was on his way to a solid finish in the Castrol GTX Ford Mustang Sunday afternoon at Kansas Speedway, but overheating issues forced him to pit under green, ultimately losing laps to the leaders to finish 27th.

It was an eventful weekend for the No. 17 team as Buescher had a tire go down in practice on Saturday, sending him to a backup car for Sunday’s 400-mile race. After the team worked extensively on the Ford Mustang, Buescher would roll off near the tail end Sunday afternoon, one of a handful of cars to do so due to multiple tire issues Saturday.

The Prosper, Texas, native worked his way into the top-20 just 70 laps in though, finishing 13th in stage one at lap 80. During the stage break he was forced to pit road twice after the team discovered what appeared to be a loose wheel.

Green-flag pit stops commenced about 40 laps into the second stage before Buescher began reporting rising temperatures inside the car, which would eventually send him to pit road. Despite the team’s efforts to clean the grill, Buescher lost multiple laps to the leaders, and not enough cautions were displayed in the closing laps to make up for the lost time.

Buescher heads to his home state next week for All-Star festivities at Texas Motor Speedway. Sunday’s race coverage for The Open is set for 4:30 p.m. ET on FS1, with the All-Star Race set for 7 p.m. ET. Radio coverage can also be heard on MRN and SiriusXM Radio.