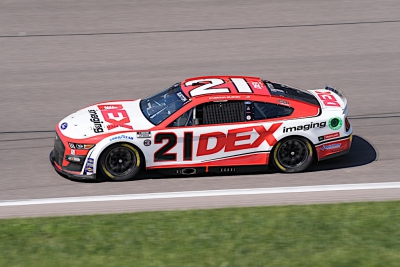 Harrison Burton and the No. 21 DEX Imaging team avoided the adversity that affected many of their competitors and came away with a 21st-place finish in Sunday’s AdventHealth 400 at Kansas Speedway.

He continued to run inside the top 25 in Stage Two and got a big break when the caution flag flew for a spin by Kevin Harvick on Lap 127, during a round of green-flag pit stops.

Burton had yet to make his stop, so he moved up to 13th place for the ensuing restart.

He ran inside the top 15 for much of the remainder of that Stage, and was running 17th when that Stage ended at Lap 165.

In the third and final Stage, with his DEX Imaging team turning out quick stops on pit road, he was able to run inside the top 15 for much of the latter portion of the race before losing several spots and crossing the finish line in 21st place, on the lead lap for the second-straight week.

Burton said the up-and-down day left him a bit frustrated.

“We ran better than we finished,” he said. “You want it to be the other way, but just really free at the end.

“It’s really hard to drive these things loose, so I don’t know if I need to do a better job or what, but when we get loose we struggle pretty bad. It was a handful at the end and it’s definitely frustrating.”

Burton said that prior to the final run to the checkered flag he and the DEX Imaging team were making the No. 21 Mustang faster.

“Overall, we just have to keep digging. It’s not what we want, but we’ll keep going.”