Can Chase Elliot Maintain his Early Season Form and Win the NASCAR Championship? 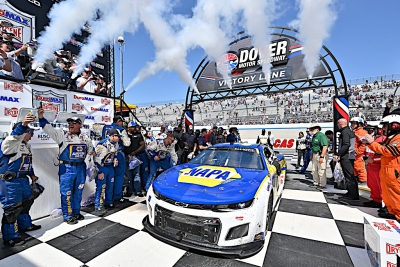 Chase Elliot finally got his first win of the season at the Drydene 400 event in the Dover International Speedway. As it stands, he is leading the races with 418 points, with the second place closing in with 368 points. We understand that the season is still far ahead, and there are plenty of exciting races to enjoy and plenty of points to get.

Undoubtedly, before Dover, many pundits didn’t think Elliot could get it done after what happened at Martinsville, and we saw how his NASCAR odds to win dropped. However, Dover put him back as the top contender for the title this season, and we look forward to him taking on the challenge as we move forward in the season.

The season is going well for Chevrolet’s no. 9, and the issues of 2021 are now behind the team. Last year, Elliot finished out of the podium positions after finishing fourth on the log. He only won two races for the entire season, and his entire stat for the season wasn’t top-notch. Therefore, it wasn’t a good look for the 2020 champion.

However, in 2022 things have changed, and we now have a different Elliot, and the 26-year-old might win his second title in three years. But he has Ryan Blaney, William Byron, and Kyle Busch pushing for the title this year. So, is it possible for Elliot to hold on till Phoenix in November? Keep reading to find out what we think.

How it Started and How it’s Going

For the first 10 races of the season, Elliot has since got top five in one, which was in Austin. Before that, he finished top 10 in three races in five races. However, after finishing 4th, Elliot has only finished outside the top 10 once, and that was in Richmond in April. As a result, he improved his game after finishing 26th in Fontana.

As it stands, Elliot has been on an upward trajectory, making him a top contender for the title this season. And without a doubt, we think he has what it takes to ensure that he maintains the lead going forward. Although Elliot has struggled in Darlington, he hoped to turn things around.

Unfortunately, with the rain washing out the Xfinity qualifying part through the session, Elliot and Poole are out of the race. He would be hoping to get back on track in Kansas. Even though it is possible to see him on the tracks, it would be some surprise as he won’t have extra track time.

Elliot dominated the first half of the race in Martinsville, but he soon fell after different circumstances, and pit stop issues cost him a win. After the race, he was the only winless Hendricks driver this season. At Martinsville, he was the car to beat for the first 185 laps after winning the first two stages.

However, after winning the second stage and losing his lead to Byron, Elliot struggled to hold on to his commanding pace. As a result, he faded out of the contention for the entire race. Although he broke Darrell Waltrip’s record for most led laps since 1980, he ended the night with an underwhelming performance.

Following the misfortune of Martinsville, Elliot worked hard to get back in the top positions, but he went on to finish 8th and 7th in the next two races. Although they weren’t top performances, it was better than Martinsville. Elliot needed a win from the 7th position in Talladega, and he got that at Dover.

Dover wasn’t an all-star performance for Elliot, but it was enough for him to win his first race of the season. Busch led the most laps with 103, while Elliot let for 73 laps. But learning from the last three races helped Elliot to improve his performance. And as a result, he was able to take his first NASCAR cup series win of the year.

Chase Elliot has had a better overall season so far, but he seemed to lag and have some performance issues in some races. A typical example was in Martinsville, where he started on a high but went down the ranking. Another example was Fontana, where he finished 26th on the log with 12 laps led.

However, in the last five races, his performance has been better, and now that he has his first win, we expect him to keep going. However, Darlington is a major setback but he can always get back when we go to Kansas in a couple of weeks.

Undoubtedly, we see Elliot going all the way and winning the title this year as we saw in 2020. However, it will be a tough one since there are still plenty of tracks to visit. But we maintain that Chase Elliot will be NASCAR’s Champion this year.