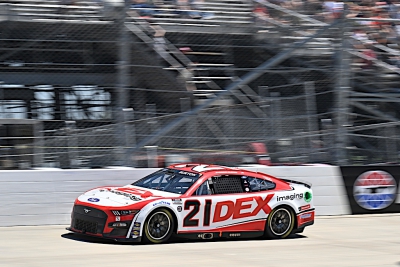 Harrison Burton and the No. 21 DEX Imaging Mustang battled the Monster Mile for most of the past two days and came away with a 24th-place finish in Monday’s rain-delayed DuraMAX Drydene 400 at Dover Motor Speedway.

Burton started 35th on Sunday after being unable to post a qualifying lap due to damage from an incident in practice on Saturday.

He went a lap down after 35 laps on Sunday and was running 32nd when rain halted the race after 69 laps, pushing the remainder of the event to Monday afternoon.

When racing resumed on Monday, Burton finished 31st in the first Stage then worked his way into the free pass position and was able to rejoin the lead lap when Kyle Larson brought out the caution flag with a spin on Lap 156.

Burton continued to run outside the top 25 until the closing laps of Stage Two, when a late caution for a collision involving Denny Hamlin and Cody Ware saw most of the leaders head to pit road for service.

Burton stayed on the track and was on the outside of the front row for a four-lap dash to the end of the Stage.

Despite his worn tires, he was able to hang on to eighth place, earning three Stage points.

After making his pit stop, he lined up 25th for the start of the third and final Stage. He worked his way to 21st at one point, but eventually fell back to 24th at the finish.

Next up for Burton and the DEX Imaging team is Sunday’s Goodyear 400 at Darlington Raceway.