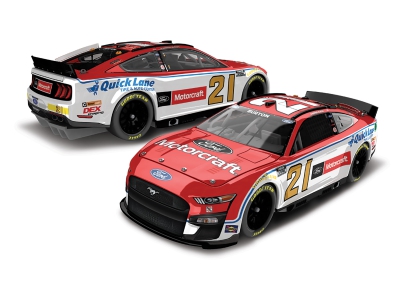 Harrison Burton and the No. 21 Motorcraft/Quick Lane team are hoping that the speed they showed at Daytona International Speedway in February can be duplicated this weekend at Daytona’s sister track, Talladega Superspeedway.

Burton was leading the season-opening Daytona 500 when a wreck knocked him out of the race. Although races at Talladega, which is similar in size and layout to Daytona, often produces a different kind of race, crew chief Brian Wilson said he and the Motorcraft/Quick Lane team are aiming to execute the same strategy at Talladega on Sunday as they did at Daytona.

“Talladega is always chaotic and highly entertaining, but we also look at it as an opportunity to score Stage points and get a great finish,” Wilson said. “At Daytona things didn’t end how we wanted them to, but we qualified well, finished strong in the Duel and were at the front when we ultimately were involved in the wreck that took us out.”

Although Burton is a rookie, Wilson said he shows good instincts in the pack racing that occurs at Daytona and Talladega. And he does have a previous Cup Series start at Talladega, where last fall he made his debut in NASCAR’s elite series.

“Harrison’s thought process in the draft and decision making put us in good positions at Daytona,” Wilson said. “The wreck was certainly not due to our approach. We’ll go into this weekend with the same mindset of trying to run up front but also keep ourselves in good positions as the draft plays out.”

There will be no practice prior to Saturday’s qualifying session for the GEICO 500, which means teams won’t have to worry about wrecking primary cars before the start of the race.