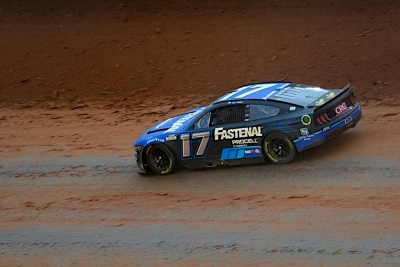 Despite a myriad of events and unknowns in Easter Sunday’s race on the dirt at Bristol, Chris Buescher came away mostly unscathed with a 15th-place finish in the Fastenal Ford.

In total, 14 cautions were displayed for a combined 82 laps as weather played a role in a few of those with a couple of different delays. Buescher began his way from the same place he finished, 15th, and navigated his way through a challenging late Sunday.

His opening stage of 75 laps saw the Fastenal machine inside the top-10 for a late restart as he went on to finish the segment in 11th. Strategy and weather-watching played a factor late as Buescher stayed on track in the break between stage two and stage three, giving him prime track position in P11 to begin the final 100-lap run.

After putting his No. 17 back inside the top-10 for the better part of 40 laps, Buescher faded slightly at the end to finish 15th.

Next up on the schedule is the spring race at Talladega Superspeedway, where Sunday’s action is set for 3 p.m. ET on FOX. Race coverage can also be heard on MRN and SiriusXM NASCAR Radio.