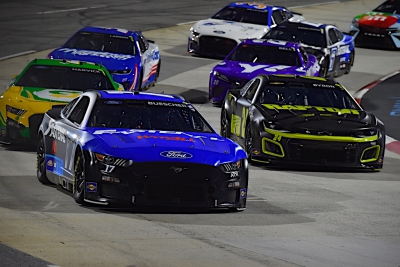 Chris Buescher and the No. 17 Fastenal team again showed impressive improvement in their short-track program in Saturday night’s race at Martinsville Speedway, as Buescher finished 15th in a race dominated by green-flag conditions and weather.

Buescher started the weekend off with a huge success, not only advancing to the final round of Friday’s qualifying, but putting his Fastenal machine fourth in time trials, a career effort for the 29-year-old. Saturday’s race this year featured just 400 laps, 100 short of the scheduled distance in past seasons.

The green flag dropped after a delay due to weather as Buescher maintained his top-10 position for much of the first stage, which ran 80 laps. He would, however, finish the stage in 17th as the handling shifted not in his favor during the late stages of the run.

He would close the caution-free stage two in the same position, and went on to battle in the cold and closing laps to record his seventh top-15 at Martinsville, and second-straight this season.

The NASCAR Cup schedule heads to Bristol Motor Speedway next weekend for the second attempt at racing on dirt. Sunday’s main event is set for 7 p.m. ET (FOX), with heat races slated for Saturday night. Race coverage can also be heard on PRN and SiriusXM NASCAR Radio.