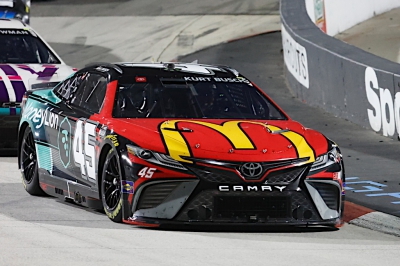 After a top-five effort nearly all race long, a sixth-place result. How was your race overall?

“I did all that I could on the loose side of things with the 45 Toyota TRD Camry. I mean, I have never been told how to drive so many laps in my life. And then when I go back to my line, I'd feel the most comfortable and the lap time would be off by a little bit. So it's like just comfort versus what I know for as many years. It was really fun though to drive Martinsville this way with this Next Gen car, but really had to work hard and I just think we maximized today. Our loose run was stage two, we were 12th and then just couldn't quite attack you know, steering wheel and throttle at the same time. And I needed the pace to drop off and longer green runs seem to help us. All in all, really happy. We know that sixth is good to right the ship for what we need to do at 23XI Racing. But overall, we need to pick it up.”